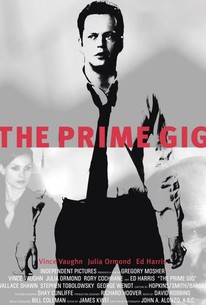 Vince Vaughn stars in this drama as Pendleton "Penny" Wise, a gifted telemarketer who can sell almost anything over the phone. He's making a good living doing phone sales for Mick (Stephen Tobolowsky), until Mick's operation goes bust without enough funds to pay Penny or his co-workers Archie (George Wendt) and Gene (Wallace Shawn). Suddenly in dire financial straits, Penny is approached by Caitlin Carlson (Julia Ormond), who is recruiting telephone salesmen for Kelly Grant (Ed Harris). Grant is a legend in the telemarketing industry, but not always for positive reasons; one of his previous operations landed him in jail, and Penny isn't sure if Grant's latest scheme -- selling shares in a gold mine -- is on the level. Grant assures Penny that his new operation is legit, and even gives him a tour of the mining facilities; Penny signs on, though he still has his doubts. Soon Penny is outpacing his fellow sales people; he receives healthy bonus checks from Grant and has also become involved with Carlson; but he has a funny feeling that the good times can't last forever. The Prime Gig was the first feature film from successful theatrical director Gregory Mosher.

Jason Sklar
as One of The Twins

Randy Sklar
as One of The Twins
View All

Critic Reviews for The Prime Gig

A film noir about telemarketing? Actually, I bought it.

...a mishmash of so many clichés that are standard to this genre which makes it impossible to become involved in the film.

A worthy entry into a very difficult genre.

A well paced and satisfying little drama that deserved better than a 'direct-to-video' release.

The film didn't move me one way or the other.

I've never bought from telemarketers, but I bought this movie.

Audience Reviews for The Prime Gig

If you are a Vince Vaughn fan like I'am,then its worth a look, otherwise, avoid this movie.