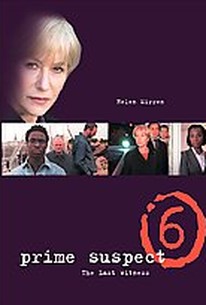 The murder of an undocumented immigrant worker leads London detective Jane Tennison (Helen Mirren) to Bosnia and back in the sixth installment of the BBC crime drama Prime Suspect. Now a high-ranking official in London's police force and crankily contemplating retirement, Tennison oversees dozens of murder investigations. But she decides to come out from behind her desk when the tortured and broken body of an unidentified woman is discovered in a warehouse. Finding out the victim's identity is hard enough, but the forensic evidence proves the woman was previously tortured years earlier. When the victim is finally identified as Samira Blekic, a Bosnian Muslim, Tennison must uncover the horror Samira suffered a decade earlier in her Balkan homeland -- and race to protect her sister, Jasmina Blekic (Ingeborga Dapkunaite), from Samira's killer. Originally broadcast November 9-10, 2003, Prime Suspect 6 is known as Prime Suspect: The Last Witness in the United Kingdom. ~ Brian J. Dillard, Rovi

... the welcome return, after a seven-year sabbatical, of Helen Mirren as Inspector Jane Tennison of the London Metropolitan Police...

Won't be checking out any other Prime Suspect for a while, thanks to The Last Witness.