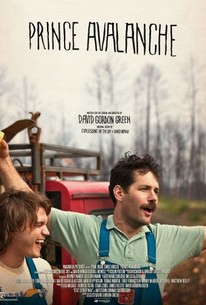 Critics Consensus: A step back in the right direction for director David Gordon Green, Prince Avalanche shambles amiably along with a pair of artfully low-key performances from Paul Rudd and Emile Hirsch.

Critics Consensus: A step back in the right direction for director David Gordon Green, Prince Avalanche shambles amiably along with a pair of artfully low-key performances from Paul Rudd and Emile Hirsch.

Critic Consensus: A step back in the right direction for director David Gordon Green, Prince Avalanche shambles amiably along with a pair of artfully low-key performances from Paul Rudd and Emile Hirsch.

Driven by striking performances from Rudd and Hirsch, Prince Avalanche is an offbeat comedy about two men painting traffic lines on a desolate country highway that's been ravaged by wildfire. Against this dramatic setting, the men bicker and joke with each other, eventually developing an unlikely friendship. Funny, meditative and at times surreal, Prince Avalanche features a score by Explosions in the Sky and David Wingo, and was shot by frequent Green collaborator Tim Orr was. Loosely adapted from Either Way, an Icelandic film by Hafsteinn Gunnar Sigurðsson. -- (C) Magnolia Pictures

Lynn Shelton
as Voice of Madison

Juniper Smith
as Kid
View All

There's almost no plot and just two other minor characters but Prince Avalanche is a haunting, eccentric and ultimately touching little curio.

This isn't a film; it's a one-act high-school play. Feel free to leave Prince Avalanche flailing in the wilderness.

The journey taken by Alvin and Lance has few plot points, but the film is remarkably gripping and rich.

A patience-testing two-hander about a pair of bickering oddballs spending an irritable summer painting traffic lines in the middle of fire-ravaged woodland.

David Gordon Green returns to serious filmmaking with this Waiting for Godot for the All Tomorrow's Parties set.

[Goes] for the philosophical jugular with fresh, easy performances and refreshing storytelling that strip emotions and life to their barest, clearing the way for an offbeat and methodically entertaining movie-going experience.

Prince Avalanche has fair performances and its relaxed direction may appease fans for Gordon Green's dramatic features, signaling the return of mature filmmaking.

In his latest film, Prince Avalanche, Green returns to the poetic landscape of Real Girls and his debut George Washington, while injecting some of the bromance ejaculate that have spiked the testosterone levels of his recent films.

A bromance-of-sorts that marches to an entirely different drum, Prince Avalanche has an organic, contemplative aura that proves an edifying tonic to the endless chest-beating that has become Hollywood's shorthand for the entire male experience.

Movies don't get much quirkier than Prince Avalanche, a picture that's every bit as odd as its title, which I still don't get even after seeing the movie. Not that it matters. I did get the movie (I think), and grew to like it by the time it was over.

An enjoyable blend of funny and melancholy that benefits from Green's solid direction and strong performances by Rudd and Hirsch, even if it feels a bit vague and purposely enigmatic as its title, with the dialogue also becoming artificial after a certain hip accident scene.

Cinematography was beautiful and the story seemed like it was going to be touching, but it never really all came together. Ended up feeling kind of incomplete.

Alvin: True love is like a ghost- people talk about it, but very few have seen it. Prince Avalanche is a return to roots for David Gordon Green. It takes him back to the quiet, indie type of filmmaking that got him started with a movie like George Washington. It has no real beginning and no real ending, and it definitely isn't for everyone. It's a completely different type of film then the comedies he's been making like Pineapple Express, Your Highness, and The Sitter, and it shows is versatility as a filmmaker. Two guys, Alvin and Lance are working on an isolated highway away from any town during the summer of 1988. They're painting the lines on a road that had been destroyed, along with many houses during a major wildfire in Texas. The two are very different, but they begin to kindle a friendship as they help each other through tough moments of their lives. This is a movie that many will think is boring, pointless filmmaking, but if you are like me, and enjoy these subtle, performance driven movies, then it's worth a look. Paul Rudd and Emile Hirsch give good performances, and for the most part are the only people on screen. In the end, I never feel in love with the film, but it was one I enjoyed for the most part.

Well, I watched this to see my fave Paul Rudd. If he hadn't been in it, I most likely wouldn't even made it half way through. It is very slow, and dull, but he helped with the tediousness, Nothing exciting to see here, just a story slowly unfolding in front of our eyes...very slowly.