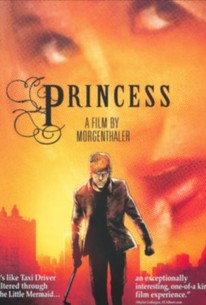 The 32-year-old clergyman August returns home from years of missionary work abroad because of the death of his sister Christina, who--after going from greatness to the gutter as the famous porno star "The Princess"--has finally died of drug abuse. She has left her five year-old daughter Mia with Karen, a prostitute. August pays them a visit to bring Mia home with him and become her guardian. Burdened by sorrow and guilt, he decides to avenge Christina's death and brings Mia along on a crusade to clear his sister's name of pornographic connotations. The mission escalates into a brutal and violent rout as August attempts desperately to protect the only thing he holds dear--namely Mia--forcing him to make a fateful decision.

Princess remains technically brilliant and never less than compelling, albeit in a queasy, troubling fashion. Its images rattle in the memory like unclean ghosts.

Although morally ambiguous, with a message that is at best confused, this is a striking debut from a talented director.

Princess is rarely a dull watch, but it doesn't pack enough of an emotional punch.

Sure, the rage is palpable in every cell, but poise and rational thinking are sadly lacking.

A few decent ideas can't cover the fact this has been done a thousand times before.

All in all I am very impressed with the command and restraint Anders Morgenthaler shows with his movie.

It's very controlled and deliberate and gives the illusion that it has something to say, but its point is a bit unclear.

...a somber, sad and, in the end, hopeful animation that is a kindred spirit to such Japanese anime as Tokyo Godfathers in look, if not feel.

A unique and memorable film, as much for its Danish animated approach to a vigilante vengeance as for its messed-up morality.

Audacious, original mix of live action and anime to tell a disturbing tale of corrupted youth.

Princess is a violent revenge thriller about a man's journey to avenge her sister by destroying all pornography and people involved with the production of it. Combined with some animation and some live action, Princess is an interesting tale about the dark side of seemingly normal Denmark and redemption, August's role was absolutely perfect for Lindhardt. Although I do enjoy the plot, I can't help but dislike the ugly animation and having a child along side the protagonist constantly annoying him. Princess is definitely not an easy film to watch, but if you like to see something different (Or in my case, Thure Lindhardt) then his is definitely a film for you