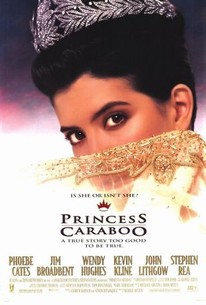 Loosely based on an actual incident, this family-friendly British comedy is also a sly satire of class consciousness. Phoebe Cates stars as a woman who appears in the English countryside of 1817 wearing exotic garb and speaking gibberish. Delivered to a nearby manor, the mystery woman is sheltered by the Worralls (Wendy Hughes and Jim Broadbent), who are then persuaded by their suspicious Greek butler Frixos (Kevin Kline, Cates' real-life husband) to have the drifter tried for vagrancy and begging, capital crimes. At the hearing, however, the woman persuades the magistrate through pantomime that she is a princess of Javanese origin named Caraboo, escaped from pirate kidnappers. The Worralls welcome Caraboo back into their home, lavishing upon her the deference due a royal. A society sensation, Caraboo wins over a linguist (John Lithgow), the prince regent (John Session), and even Frixos. Only an Irish reporter, Gutch (Stephen Rea), remains skeptical about Caraboo's origins.

Peter Howell
as Clerk of the Court

The great costumes and sets are more substantial than the plot and characters.

Michael Austin's Princess Caraboo is a surprise delight: an English film that knows exactly what it's doing, and does it with style.

This snappy and exuberant comedy celebrates creativity as an asset of free spirits.

It was cute enough.