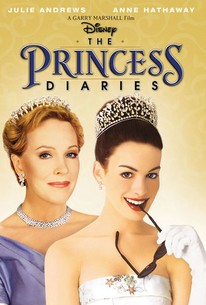 This teen comedy from Disney is based on a popular novel by Meg Cabot and directed by Garry Marshall. Mia Thermopolis (Anne Hathaway) is a teenage klutz who's openly mocked by the popular Lana Thomas (pop singer Mandy Moore). In fact, Mia's only friend at her exclusive prep school is the socially outcast Lilly (Heather Matarazzo). Mia's life takes a dramatic turn, however, when her mom announces that her late biological father was in actuality the crown prince of a small European nation, Genovia. Now Mia is the sole heir to the throne, and her grandmother, Queen Clarisse Renaldi (Julie Andrews) wants to tutor the awkward teen in royal behavior. It's a daunting task given Mia's lax table manners, poise, and hair care, but the girl perseveres with some makeover help from her grandmother's security chief Hector Elizondo) and a style expert (Larry Miller). In the meantime, Mia's romantic affections are torn between the handsome, popular Josh (Erik Von Detten) and the more appropriate Michael (Robert Schwartzman), who also happens to be Lilly's brother. The Princess Diaries is the second film from Whitney Houston's production shingle after the television version of Rodgers and Hammerstein's Cinderella (1997). ~ Karl Williams, Rovi

Willie L Brown Jr.
as Himself, Mayor of San Francisco

Willie Brown
as Himself

Jason Ashland
as Trolley Tourist No. 1

Mary Knoll
as Trolley Tourist No. 2

Shan Elliot
as Member of Flypaper

Harold Carter
as Member of Flypaper

Fat Louie
as Himself

News & Interviews for The Princess Diaries

View All The Princess Diaries News

Critic Reviews for The Princess Diaries

Terrific fun for girls and their families, too.

A light, uneven Pygmalion story that may win young girls over with its wish fulfilment theme and teen movie staples, but does not live up to the expectations created by the cast and director.

Notions of responsibility, surrogacy, rites of passage and the value of friendship are gone through, but the highlighting of modern tropes merely serves to emphasise the film's conventionality.

It's a cozy message for young girls, even if it's couched in a predictable plot that is pure Disney.

Those in the market for what it has to offer will find it pleasantly agreeable, and those who aren’t won’t be in the theater in the first place.

To say that both Anne Hathaway and Julie Andrews are absolute perfection in The Princess Diaries would not be an understatement.

Do Queen Clarisse and Joe succeed with their fair lady? Does Mia accept her destiny? Does she get her Prince Charming? Come on! This is Hollywood. This is Garry Marshall. This is a fairytale. This is once-upon-a-time. This is as good as it gets.

This fairy tale, which feels as if it were made in the 1960s, deatures a star-making performance from the child-actress Anne Hathaway

This Cinderella fantasy transforms a geek into a princess, and teaches a few life lessons along the way.

That this failed is largely down to the stilted, clichéd dialogue of the screenplay; fans of the wittier novel by Meg Cabot may well be disappointed.

Audience Reviews for The Princess Diaries

I love the The princess Diaries i've seen them countless times and i love them more and more every time i watch them! I find them extremely amusing and im guarenteed to be cheered up when i watch them! Anne Hathaway has great comic timing and is thoroughly enjoyable to watch, its a great cast and just a lovely light hearted funny teen dramedy! :)

Not my thing, but im a guy, haha. The movie has a interesting premise, and works out well, but soon becomes just another chick flick, with afunny cast, but is not my kind of movie.

Julie Andrews and Anne Hathaway make a great combination and this film is hysterical. Definite must watch and the sequel doesn't dissapoint.

It was an okay type of movie. Anne Hathaway acted well. Her before face was not that bad if you ask me. Loved the grandma. Very elegant and cool. It's a good movie to watch with your family.