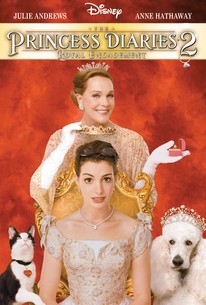 Critics Consensus: Anne Hathaway and Julie Andrews bring charm and elegance to the movie, but there's not enough material for them to work with in this sequel.

Critics Consensus: Anne Hathaway and Julie Andrews bring charm and elegance to the movie, but there's not enough material for them to work with in this sequel.

Critic Consensus: Anne Hathaway and Julie Andrews bring charm and elegance to the movie, but there's not enough material for them to work with in this sequel.

Directed by Garry Marshall, The Princess Diaries 2: Royal Engagement picks up where its predecessor left off -- that is, with American teenager Mia Thermopolis (Anne Hathaway) reeling over the news that she is a princess within the royal family of Genovia, a little-known European nation with a population of barely 50,000. As promised, Mia, along with her best friend, Lilly (Heather Matarazzo), travels to Genovia after their high-school graduation. The unlikely princess has hardly settled into the castle, let alone begun representing the country, when she learns that a larger title is approaching more rapidly than expected; it seems as though Mia will have to take over as queen. Suddenly, in addition to further schooling on the etiquette of royalty, Mia finds herself with a daunting prospect -- according to Genovian law, all princesses must be married before they can be crowned. In addition to Julie Andrews' reprisal of her role as Queen Clarisse Renaldi, The Princess Diaries 2 also features Hector Elizondo and John Rhys-Davies in supporting roles. Though Princess Diaries author Meg Cabot did pen a sequel (The Princess Diaries: Princess in the Spotlight), this film is not an adaptation.

A fun romp for girls of all ages.

I'd like to, but than that would be lying, and if I've ever learned anything from Disney it is that lying is wrong.

A chocolate-box sequel whose rose-tinted view of constitutional monarchy will provoke hoots of derision this side of the pond.

This threadbare sequel takes a page from such revisionist fairy tales as Shrek and Ella Enchanted, movies that assume we've grown so weary of the same old Cinderella story that they go out of their way to invert the formula.

Scenes end abruptly, laughs are as rare as yetis, and the overarching question seems to be: Can we turn this into a franchise?

Sometimes charming, sometimes a tad too silly and all the time predictable, Princess Diaries 2 gives you what you'd expect and doesn't take many chances besides allowing for the possibility that a princess might be okay without a husband.

A braindead film that sucks the life out its audience with its annoyingly overbearing screenplay.

A fairytale, once-upon-a-time. . .this movie is for the princess in all of us.

The pace of ``Diaries 2'' is not always as crisp as some of Marshall's other films, but it is an amiable enough entertainment.

Was there a point of a sequel to a movie that was just decent after all?

The larger message -- that you should marry for the right reasons only when you're ready -- is one everyone can applaud.

In a typical big, crappy summer movie, you sometimes feel the filmmakers' disinterest in the audience, but in The Princess Diaries 2 the feeling is more like contempt.

Again i still very much enjoy these movies, i think this second one is maybe more funny than the first, still very enjoyable and light hearted. Its a great teen comedy to keep you amused.

No, this was way too cheesy. Anne Hathaway's carelessness was way too much. But I did liked the romantic moments which was the only part I enjoyed.

It was not even nere the first. The first was original and funny, this was not. This film was pure torture to watch, what a horrible film.

As funny as the first film.