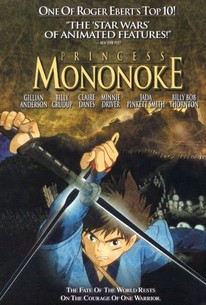 Critics Consensus: With its epic story and breathtaking visuals, Princess Mononoke is a landmark in the world of animation.

Critics Consensus: With its epic story and breathtaking visuals, Princess Mononoke is a landmark in the world of animation.

Critic Consensus: With its epic story and breathtaking visuals, Princess Mononoke is a landmark in the world of animation.

Directed by renowned animator Hayao Miyazaki, this anime has broken a number of box office records in its native Japan. Essentially a statement on the ecological devastation brought on by human advancement, the story follows the battle between Princess Mononoke and a mining village.

Akihiro Miwa
as Moro the Wolf

Done mostly in the style of hand-painted classic animation, with occasional digital assists, "Princess Mononoke is indeed a thing of beauty and imagination.

This handsome, beautifully designed Japanese animated film has the size -- though not the clarity -- of a great Japanese film epic.

With a Luminist's attention to light, water, shadow and smoke, Miyazaki creates an epochal story born of history, myth and Shinto animism.

This imaginative and intriguing Anime deserves all the plaudits heaped upon it.

Beautifully constructed and painstakingly written, this is about as close to a perfect animated epic as you're likely to get.

It's a powerful allegory that stands on it's own as a beautiful piece of art that is wildly entertaining.

Hayao Miyazaki's dark world of magic, in which humans and forest gods vie for supremacy, stands alongside the real one, commenting upon its shortcomings.

'Princess Mononoke' gives empowered voices to women (in a time where they didn't have any) & doesn't make them victims in need of a savior. It also forces audiences to look inward and question the way we consume things from the world around us.

In a style similar to "Nausicaa of the Valley of the Wind" but much richer in context, Hayao Miyazaki manages to present a number of different comments, mostly having to do with the dark side of human nature

[Miyazaki understands] the myriad complications of being a person in this world, a world with too many layers for a word like 'evil' to suffice, and Princess Mononoke reflects that.

This is a visual treat featuring some truly unique creatures -- just check out those oddities that look like an unholy cross between Casper the Friendly Ghost and that chattering demon from the Hellraiser flicks.

Miyazaki returns to the ecological message that he explored in Nausicaä and elevates it to an epic level with this splendid story of man vs. nature, and more wonderful than its stunning visuals and score is to see so many complex characters who can't be defined as heroes or villains.

Hayao Miyazaki's Princess Mononoke lays out the gods and the demons.

There is an interesting story to tell and it does have a lot going for it. The uniqueness of the plot details and the likability of some of the characters hold interest; however, the film slows down in places and the finale was overly long leaving a run time easily over 2 hours.

The animation of the characters and even the violence, which is more adult oriented, are nicely drawn. Other elements, including the gods, are more abstract and weird, but don't feel out of place in the grand scheme of things.

Yoji Matsuda and Yuriko Ishida lead a Japanese cast that provide satisfying voice work for each of their respective characters. No problems in this department.

Princess Mononoke does a lot of things well. It's the drawn out story that is the biggest disappointment.

A much more action-oriented Hayao Miyazaki film that boasts intoxicating animation that beautifully combines traditional with computer-generated and a suitably complex and epic plot. Also one of the more violent Studio Ghibli flicks (far from a blood bath but the film's violence justifies it's PG-13 rating), so it may not be suitable for younger children. Despite it's slightly bloated runtime, this is a very well-rounded eco-themed fantasy epic.

i am a big fan of miyazaki, and i think this may be my favorite of all his films. really this is one of the best animated films i have ever seen. the oddities and animation style are all typical for ghibli, but there was something specific about this story, as with my neighbor totoro, that i really resonated with. the characters and plot structure are so epic and yet so personal. a wonderful film.