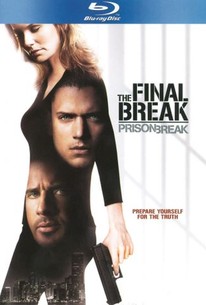 The prison break saga winds to a close as Michael teams up with his deadliest enemies to attempt the most daring breakout ever. Realizing that they don't have a chance of getting to Michael Scofield, the federal government decides to play dirty by going after the woman he loves. Arrested for murder while pregnant with Michael's unborn child, Sara is locked away in an impenetrable women's prison. But there's a price on Sara's head, and her time is running out. Realizing that the fates of the woman he loves and their future child are both on the line, Michael forms a dangerous alliance in order to break her out before it's too late.

We are back to the flavor of the original seasons and get away from the 24 and Alias flavor the series took on in the last season.

For 4 years, Prison Break was the smartest, grittiest, best casted, and best written show on Television. While badly harmed by the 2007 writers strike and low ratings, this show never did get the recognition it deserved. When Paul Scheuring created the show, he wrote a story he'd planned to last six season, however in the middle of season 4, he pulled the plug. Scheuring decided that the show had become a farce of itself and would not longer continue. In the final 15 minutes of the last episode of season 4, they jumped ahead 3 years to the ending Scheuring had originally envisioned, and it left fans with millions of unanswered questions. They were outraged and besieged the network with letters. The result, the events of a hypothetical season 6 were condensed into a 90 minute movie. The movie was a return to the shows beginnings and was terrific! While season 4 did get stupid, this would have been a fantastic season and an amazing way to end the show. Of course when you condense 24 episodes into an hour and a half, it's going to be rushed and have holes, but they do a nice job of trying to explain everything and ultimately do give the fans the closure they desired. This was the smartest show I've ever seen and no matter what this cast does for the rest of their careers, it will never compare to the incredible job they did on this show and in this movie.

Breaktaking and excellent ending! I think they should have skipped the flashforward at the final episode of Season 4 and added it instead at the end of The Final Break, that's what we saw that Michael Scofield dies (his tombstone). At the ending was so sadly that brought me tears as well as I liked Michael's last quote - "We're free!" The result is a fast paced, exciting and emotion filled adventure full of twists and the movie's touching coda. Wentworth Miller, Dominic Purcell, William Fichtner, Sarah Wayne Callies and the rest of the gang all do their usual solid work although this mostly Miller and Callie's show.

I loved it. A fantastic finale to an incrediable series. An electrifying edge of your seat thriller that is loaded with unstopable tension and breahtaking suspense all the way to the end. It has all the intelligence, vivid storytelling and teriffic performances that the show had to offer. A sheer pulse-pounding entertainment ride. It's sharp, fast-paced, smart, unpredictable and exhilerating.