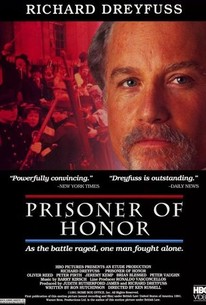 Directed by Ken Russell, Prisoner of Honor is a made-for-cable retelling of the 1894 court-martial of French Army officer Alfred Dreyfus. The historical drama stars Richard Dreyfuss (no relation) as the head of counter-intelligence who uncovers several damning pieces of evidence. It turns out that the French government has sent an innocent man to prison for their own suspicious reasons, and Dreyfuss is the only man willing to fight for the prisoner's freedom. Prisoner of Honor also stars Oliver Reed and Peter Firth, as well as featuring Lindsay Anderson, Brian Blessed, Jeremy Kemp, and Peter Vaughan.

Critic Reviews for Prisoner of Honor

There are no featured reviews for Prisoner of Honor at this time.