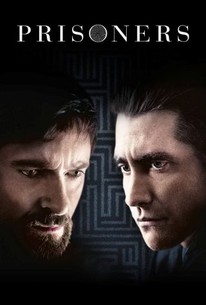 Critics Consensus: Prisoners has an emotional complexity and a sense of dread that makes for absorbing (and disturbing) viewing.

Critics Consensus: Prisoners has an emotional complexity and a sense of dread that makes for absorbing (and disturbing) viewing.

Critic Consensus: Prisoners has an emotional complexity and a sense of dread that makes for absorbing (and disturbing) viewing.

PRISONERS, from Oscar (R)-nominated director Denis Villeneuve, stars Oscar (R) nominees Hugh Jackman and Jake Gyllenhaal in a story that poses the question: How far would you go to protect your child? Keller Dover (Jackman) is facing every parent's worst nightmare. His six-year-old daughter, Anna, is missing, together with her young friend, Joy, and as minutes turn to hours, panic sets in. The only lead is a dilapidated RV that had earlier been parked on their street. Heading the investigation, Detective Loki (Gyllenhaal) arrests its driver, Alex Jones (Paul Dano), but a lack of evidence forces the only suspect's release. Knowing his child's life is at stake, the frantic Dover decides he has no choice but to take matters into his own hands. But just how far will this desperate father go to protect his family? (c) WB

Michelle Keller
as Woman at Vigil

Jane McNeill
as Nurse
View All

Guzikowski's well-honed thriller occasionally idles under Villeneuve's dark character studies, but the director's powerfully imposed mood of dread elevates what might otherwise have been just a superior police procedural.

An increasingly sloppy thriller, filled with obvious clues, laughable red herrings, and halfhearted "shock" reveals, played at a snail's pace that lets far too much air into the narrative.

This film haunted me for days and weeks after seeing it, and the feeling still lingers.

Prisoners -- sometimes awkwardly, for the most part persuasively -- does a delicate balancing act between outright nightmare and naturalism.

Even the most seemingly benign scenes posses a low level of fear, and the final hour is heavy enough to leave audiences shaking (and shaken).

Jackman is still in his phase of high-masculine misery... The entire performance is an exclamation point, and he swings it like a baseball bat.

Filmed like a horror film, and with a mood to match, Prisoners is haunting and will stick with you.

Despite a kidnapping premise that has the strength and suspense to pull viewers in, the running time offers a drastic disservice.

There is a level of bleakness to Villeneuve's film that one usually only sees in the film cultures of Japan and South Korea - a willingness to take a narrative one step further than its audience might be comfortable taking.

"Prisoners" is a mystery that is as physically and emotionally pulverizing to you the viewer as it is to the characters.

Prisoners is a dark, tense and brutal movie.

With fantastic performances (Gyllenhaal deserves an Oscar), an extremely complex script so well written in every single detail and a phenomenal direction that invests in a slow-burning tension with perfection, Prisoners is certainly one of the best films of the year.

Outstanding acting, a tight, mesmerizing and engaging script and the directing make this one of the most exciting and best thrillers of recent years. The themes and questions raised here together with the images stay with you for a very long time. A gem of the genre.

Grim, ugly and violent. Good acting but not enjoyable as a viewing experience.

After a man's daughter is kidnapped, he resort to torturing the police's prime suspect in order to discover her whereabouts. As a thriller, this film follows the basic genre conventions. It's tense, mysterious, and occasionally compelling. However, it seems the film's ambitions are beyond a basic genre film. A lot of the film's exposition establishes Keller Dover (Hugh Jackman) as a survivalist -- a right-wing, anti-establishmentarian -- in order to explain his extreme behavior later. But this theme remains undeveloped. I can imagine a good film that questions whether a man's personal moral compass should override the moral compass that most reasonable people agree to, but by the second act, the film devolves into torture porn and the generic dramatic questions overtake the film's philosophical musings. Jackman has never been an impressive actor, and what depth we see in Keller comes from the script, not his performance. The same can be said of Jake Gyllenhaal, and unfortunately the plot renders Maria Bello catatonic halfway through the film. The best performance is by Paul Dano, who never fails to impress. Overall, as a thriller, Prisoners fits the genre, but as anything more, it's close but not quite.