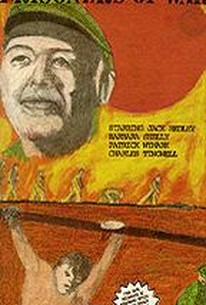 This British WWII adventure film concerns a woman trapped in a prisoner of war camp and hidden by her fellow POWs from their Japanese captors. Elaine (Barbara Shelley) is a secret agent whose plane is shot down over the island of Malaya in 1944 by the Japanese. With no other recourse except capture, she enters the POW camp on the island and is hidden by Crewe (Jack Hedley) and his fellow prisoners. The Japanese realize that Elaine must be somewhere on the island, however, and when their search fails to produce her, they suspect that their prisoners know more than they are willing say. So the men are tortured one by one, and eventually a few crack and tell the truth. Elaine is then caught and also tortured. When her inquisitors realize the importance of the information Elaine carries, plans are made to send her to Singapore for interrogation at the hands of experts. The Secret of Blood Island (1965) was one of few features produced by television director Quentin Lawrence. ~ Karl Williams, Rovi

Critic Reviews for Prisoners of War

There are no critic reviews yet for Prisoners of War. Keep checking Rotten Tomatoes for updates!

There are no featured reviews for Prisoners of War at this time.