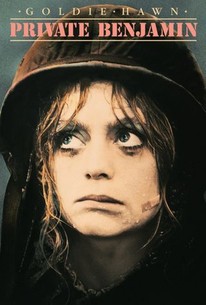 Critics Consensus: Private Benjamin proves a potent showcase for its Oscar-nominated star, with Hawn making the most of a story that rests almost completely on her daffily irresistible charm.

Critics Consensus: Private Benjamin proves a potent showcase for its Oscar-nominated star, with Hawn making the most of a story that rests almost completely on her daffily irresistible charm.

Critic Consensus: Private Benjamin proves a potent showcase for its Oscar-nominated star, with Hawn making the most of a story that rests almost completely on her daffily irresistible charm.

Devastated when her brand-new husband (Albert Brooks) drops dead on their wedding night, Jewish American princess Judy Benjamin (Goldie Hawn) is receptive to the pitch delivered by a duplicitous recruiter for the Women's Army Corps. Quickly adivsed by topkick Captain Lewis (Eileen Brennan) that she should not look forward to the private room, fancy clothes and sauna bath that she'd been promised, Judy is forced to go through basic training like any other "grunt". This turns out to be a real growth experience for the pampered Private Benjamin, who for the first time in her life has to work for her privileges. A brief misadventure with a lascivious paratroop officer (Robert Webber) nearly sours Judy on army life, but she turns out to be a darned good soldier-and a woman with a highly developed sense of self-esteem, which enables her to weather a further disappointing romantic fling with French phsycian Henri Tremont (Armand Assante). Private Benjamin turned out to be one of Goldie Hawn's most profitable vehicles. The 1981-82 TV sitcom spinoff starred Lorna Patterson in Goldie's role, with Eileen Brennan repeating her film characterization of the long-suffering Captain Lewis. ~ Hal Erickson, Rovi

Estelle Marlov
as Vocalist at Wedding

"Private Benjamin" seems coarse, sluggish and interminable as a comedy scenario, but the profoundly depressing aspect of it is that Goldie Hawn appears to be receding as a comedienne and emerging as a boss lady.

This is arguably although unfortunately Goldie Hawn's most memorable role.

[Hawn's] not so gifted that she can carry a heavy load of indifferent material on her own two little shoulders, without considerable sagging.

Another depressing example of the big-screen gag-string sitcom, it turns exclusively on a plot that grew from a concept that developed from an idea that somebody should never have had - Goldie Hawn joins the army.

Mr. Zieff demonstrates great skill in keeping the gags aloft and in finding new ways by which to free the laughs trapped inside old routines about latrine duty, war games, forced marches and calisthenics.

The film doesn't spoof the U.S. military as much as it pokes fun at people too fragile or ill-prepared for strict discipline, physical fitness, and zealous teamwork.

Within the limitations of the genre, this story of private Benjamin ends up being entertaining at times. It doesn't add anything new, but it brings to us a new and special performance from the brilliant actress Goldie Hawn. [Full Review in Spanish]

It's basically a one-joke effort, but that joke has Hawn throwing herself with great gusto into the role of a bewildered spoilt brat who comes good and her Oscar-nominated performance has huge charm.

The pampered Hawn's reactions to rigorous training exercises, her interactions with her superiors, and a not-quite-successful love affair with French physician Armand Assante while on duty in Europe inspire plenty of laughs.

One half of this situation comedy has a one joke premise that wears thin fast, that of a poor little rich girl forced to live out of her ivory tower. Ho-hum. The other half is essentially that all men are jerks and thus unreliable. Lesser Goldie Hawn. Pass.

Thinking that it's a vacation spot, Jewish American Princess joins the Army. Goldie Hawn, whose work never impressed me before, gives an excellent performance, mostly in her silence. Her cold, hurt stare at her father when her parents come to pick her up from boot camp, her dead-pan sex scene - she's great in the in-between moments. The film's femme-power message is good, but most of the story belies believability. Even the dumbest person wouldn't believe the myths about vacation condos in the Army, Private Benjamin's defeat of the opposing squad, the lecherous superior officer, her time in Paris, even the cliche of girls sitting around talking about how they lost their virginity - it's all too trite and too convenient and bespeaks heavy-handed writing. This story doesn't unfold; it jumps. Overall, Hawn's work is remarkable, but the film's flimsy plot leaves much to be desired.

Goldie Hawn -- I remember when she was cute. Sadly, cute grimaces don't make up for talent.

It's a good film, but only for it's obvious target audience. It has a few funny moments but it got boring in it's second half and ran out of steam. The performance of Goldie Hawn is great but everything else could have been better leaving this chick flick as enjoyable as accidentally signing up for the army.