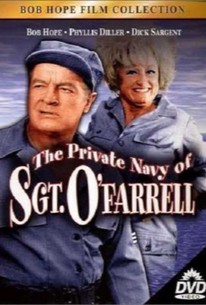 O'Farrell (Bob Hope) is a navy sergeant who tries to boost the moral of the men by bringing in a shipment of beer. When the beer turns up missing, he calls an all-out search for the suds. In the process, O'Farrell captures a Japanese submarine single-handedly and tries to pilot the boat to safety. Phyllis Diller stars as the nurse who does absolutely nothing for troop moral in this uneven and poorly conceived comedy. Gina Lollobrigida and Jeffrey Hunter also star in the feature.

Critic Reviews for The Private Navy of Sgt. O'Farrell

Some of [Hope's] material is terribly familiar by now.

There are no featured reviews for The Private Navy of Sgt. O'Farrell at this time.