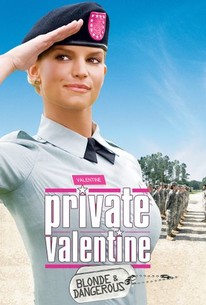 Noted genre specialist Steve Miner (Lake Placid and Halloween: H20) takes a break from horror to direct Dukes of Hazzard star Jessica Simpson in this showbiz comedy concerning a pampered movie starlet who gets in over her head while attempting to land a lucrative film role. Informed by the producer that she is unfit to appear in an upcoming military-themed film, the ambitious but woefully shortsighted actress enlists in the Marines in hopes that the studio will take notice of her initiative. Though she immediately realizes her mistake upon arriving at Camp Pendleton, the patriotic actress determines to follow through with her plan and do her country proud in the process. ~ Jason Buchanan, Rovi

As eye-rollingly silly and predictable as one might've anticipated...

Valentine (aka Major Movie Star) is a graceless, flavorless farce built around the idea that Simpson's dimwit routine still holds appeal and the hope that the target demo has never heard of Goldie Hawn.

The story wasn't really special but I enjoyed the whole movie.

Major misfire. The film is not Private Benjamin. Simpson was much better in Employee of the Month, than this film. This film needed another director, rewrite, and a new cast for it to work. Vivica A. Fox and Cheri Oteri are the only good things in this film. There are 3 or 4 funny moments in the film. My final word, skip the film, watch Private Benjamin instead.

This blonde comedy army film reminded me of Private Benjamin while Jessica Simpson is taking over her title role from Goldie Hawn. Simpson is actually quite good in this role. In fact, everyone does a good job, but I was particularly impressed with Simpson's acting ability, and this comment comes from a man who is not one of her fans. There was no heavy emoting to be does here, but Simpson did show us a diverse set of acting abilities. If the directing had been tightened up a little, then this film, Simpson included, could have really shined and exceeded all expectations.

the same man who directed 2 Friday the 13ths and 1 halloween also directed this shit. so obviously im not the only one who this this is scary.