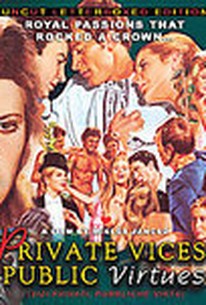 The son of Emperor Franz Josef of Austria, Crown Prince Rudolf, is believed to have shot his female lover and himself in a tragic suicide pact in 1882 in Mayerling. Due to Imperial cover-ups, the full story may never be known. This story has been filmed several times, in French in 1935 and in English in 1968. Hungarian director Miklos Jancso recreates those events for his own purposes, continuing his favored theme of the rejection of paternal authority. In the film, which has very little dialog, Rudolf is a good-natured pan-sexual golden boy, who cavorts on his rural estate with a host of beautiful, aristocratic lovers and friends of both sexes. He refuses to leave his country idyll even though he has been ordered to by the Emperor, his father. Despite the fact that for a large part of the film, attractive young people go about unclothed and engaging in erotic encounters, the mood is one of melancholy rather than prurience. The Prince is a political liberal who wishes to arrange things so that the Emperor will arrest him, creating a public scandal which will provide a rallying point for the opposition. Instead, when the expected troops come, Rudolf's sensuous friends loyally ward off the Imperial officers, humiliating them in the process. The result is that the guests, the Prince and a hermaphrodite friend are killed by newly arrived Imperial reinforcements, and the now-familiar official story of murder and suicide is concocted for public consumption. ~ Clarke Fountain, Rovi

The movie ends up being childish despite its carnal excesses. [Full Review in Spanish]

There are no featured reviews for Private Vices Public Virtues at this time.