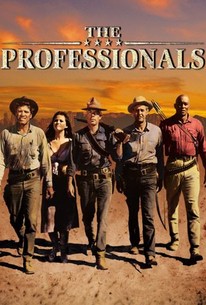 Grant (Ralph Bellamy) is a wealthy rancher who hires four mercenaries to retrieve his wife, Maria (Claudia Cardinale), from the clutches of the desperado Raza (Jack Palance) in this Western adventure set in 1917. Dolworth (Burt Lancaster) is a munitions expert who joins gunslinger Fardan (Lee Marvin), horse trainer Hans Ehrengard (Robert Ryan), and longbow master Jake (Woody Strode) when the men are offered 10,000 dollars apiece for the safe return of Grant's kidnapped wife. The cadre travels 100 miles into Mexico to retrieve the woman, whom they later discover wants to remain with Raza, but they decide to nab Maria anyway to make good on the money. Soon Fardan, Hans, and Jake are chased across the border by the enraged Raza and his equally deadly female accomplice Chiquita (Marie Gomez), while Dolworth stays behind to fight off Raza's Mexican banditos. The film received Academy Award nominations for Best Direction (Richard Brooks), Best Screenplay (Brooks again), and Best Cinematography (Conrad L. Hall). ~ Dan Pavlides, Rovi

Dirk Evans
as Man at Door

Edward Little Sky
as The Prisoner

Eddie Little Sky
as The Prisoner

Critic Reviews for The Professionals

It was comprehensively eclipsed by Peckinpah's ostensibly similar The Wild Bunch.

It's 'guys on a mission' time in this wonderful but improbable tale.

An exciting mix of twists and turns and adventuresome panache.

The Professionals is a frustrated movie from the very beginning. It's a story of incoherent and chaotic adventures. [Full Review in Spanish]

It's one of Brooks's more eloquent and witty films.

A truly adventuresome, action-filled film that is played more for thrills than for conveying a story.

It's a little dated and has a few shot-on-bad-studio-set moments, but on the whole it's an impressive film, even if you don't normally care for Westerns.

Audience Reviews for The Professionals

The set-up of rough guys getting hired to free a kidnapped woman seems somewhat generic for Western films of that era, but the movie takes a few unexpected turns on the way. The action is plenty and filmed decently enough, the landscapes are absolutely gorgeous. Of course it still feels a bit dated but overall it's still a pleasant and entertaining experience from a time long gone.

Son of the Magnificent Seven - With few exceptions, westerns tend to follow a basic formula: bad guys, good guys, horses & guns. The Professionals isn't deep or cerebral but it is entertaining. A star-studded genre classic.