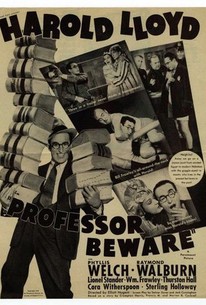 Harold Lloyd plays a professor of Egyptology, frightened by the notion that he has fallen under an ancient Egyptian curse. Lloyd has the opportunity to join an archeological expedition to search for a missing tablet that will determine his fate, but he has to travel from Los Angeles to New York before the party sails to Egypt. Alas, Lloyd is also required to appear in court to answer charges of "indecent exposure" (it's a long story). The rest of the film is a frantic chase with the authorities pursuing the fugitive professor across the country, highlighted by a daredevil sequence atop a moving train. Most of the individual gags are funny, but Professor Beware is several notches below the standard set by Harold Lloyd's silent films. The lukewarm boxoffice response to this film would convince Lloyd that he should retire from performing--which he did, returning to the screen only for 1947's Sins of Harold Diddlebock.

Sterling Holloway
as Rupert the Bridegroom

Charlotte Wynters
as Dorothy the Reporter

James Donlan
as Reporter in Museum

Charles Lane
as Joe the Photographer

Bruce King
as `Neferus' in Tableaux

Brandon Hurst
as Charlie the Butler

Wade Boteler
as Officer in court

This is as wild and funny a picture as Harold Lloyd has ever made. Our guess is that he will need another two years to recover from his bruises and get his breath back.

There are no featured reviews for Professor Beware at this time.