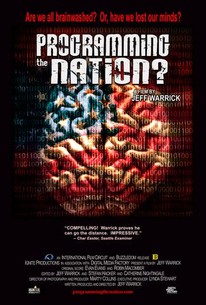 Programming the Nation? takes a powerful and provocative look at the history of subliminal messaging in America and the ways in which we are being manipulated subconsciously by advertisers, pop-culture, corporations, our military, and politicians. Filmmaker Jeff Warrick leads this journey through the subconscious mind while examining the reported history, scientific research and potential effects of such techniques on society. With eye-opening footage, revealing interviews (with Democracy Now's Amy Goodman, Congressman Dennis Kucinich, Rolling Stone's David Fricke, Douglas Rushkoff and Noam Chomsky, amongst many others), humorous anecdotes, and an array of visual effects, the film categorically explores the alleged usage of subliminals in advertising, music, film, television, political propaganda, military psychological operations, and even advanced weapons development. -- (C) Ignite Productions

Critic Reviews for Programming The Nation?

The filmmakers deserve credit for delving into a topic that has received scant attention in the movies, but a lot of it is old news (except, perhaps, for younger viewers).

Profoundly disturbing, as ambitious as it is provocative.

"Programming the Nation" is a fascinating, infuriating film.

This thought-provoking but overlong doc wins points for being all-inclusive.

A creaky parade of conspiracy and paranoia that collapses military brainwashing and suspected backward-masking in the recording industry into one indigestible lump.

What's most frustrating about Programming The Nation? is that the topic is fascinating, and it hasn't been dealt with extensively in documentary form.

A shaggy look at the history of subliminal messaging and advertising in the United States that leaves one wanting for the pruning of a sensible editor.

Serves as a vital wake-up call and manages to be simultaneously entertaining, provocative and enraging--just as all harsh truths, sans euphemisms, should be presented.

Some excellent interviews and a thoughtful global consideration of its topic more than offset an enervated tone.

Ignore the negative reviews. This film is essential viewing for those trying to get a handle on the Orwellian world we are living in today.

It seems that the filmmaker has a very broad view of what subliminal messaging is all about.

Audience Reviews for Programming The Nation?

There are no featured audience reviews yet. Click the link below to see what others say about Programming The Nation?!