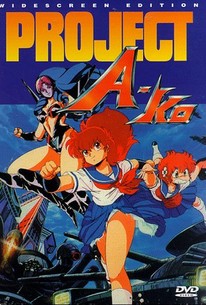 This animated sci-fi adventure-comedy from Japan concerns A-ko, a schoolgirl with super-human powers whose friendship with the friendly but intellectually challenged C-ko is threatened when rich brat B-ko decides that she wants C-ko to be friends with her -- and no one else. A-ko finds herself attacked by giant robots, angry aliens, and female bodybuilders doing B-ko's bidding as the fight escalates to cosmic proportions. When not dealing with B-ko's lousy temper, A-ko also tries to help find an alien princess stranded on Earth. ~ Mark Deming, Rovi

There are no critic reviews yet for Project A-Ko. Keep checking Rotten Tomatoes for updates!

Really funny and great entertaining as one of my number one favourite Anime. I really love A-Ko's incredibility actions against her sworn enemies to protect her best friend, C-Ko, she's from different world. C-Ko is driving me little crazy like she acts like a childhood girl, not teen girl. And B-Ko is fabulous as brainy, gorgeous and filthy rich teen bitch and enemy of A-Ko. I totally loved it!