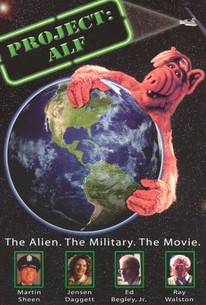 This made-for-television comedy picks up where the TV series ALF left off. On his way home, ALF is captured by the military and forced to undergo experiments commanded by Col. Gilbert Milfoil. Two Military officers take pity on ALF and free him, but he's still far away from home.

Paul Fusco
as Voice of ALF

There are no critic reviews yet for Project: ALF. Keep checking Rotten Tomatoes for updates!