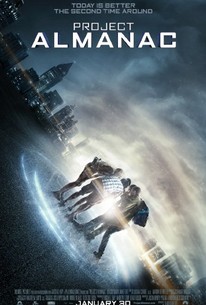 Critics Consensus: Project Almanac isn't without wit or originality, but its thin story and irritating found-footage camerawork ultimately make it difficult to recommend.

Critics Consensus: Project Almanac isn't without wit or originality, but its thin story and irritating found-footage camerawork ultimately make it difficult to recommend.

Critic Consensus: Project Almanac isn't without wit or originality, but its thin story and irritating found-footage camerawork ultimately make it difficult to recommend.

Joshua Brady
as Break Up Guy

The genre dramatizes the identity formation that goes on during the digital technology-glutted adolescent years, which are filled with screens and captured images, whether from smartphones, cameras, vlogging, or pictures on social media.

The 106 minutes between the opening scene and the end credits still feels like an eternity.

[It] is a "found footage" movie. This gimmick may have run its course: not only does Israelite use the method inconsistently, he never shows why it's needed to tell this particular story.

By the time the mind-bending paradoxes kick in, the film's potential complexities have devolved into mere clutter, both narrative and visual: the coolest thing the device does is to make debris revolve in mid-air.

Dean Israelite's time-travel drama is hampered by its own found-footage conceit.

Has all the annoying traits of found footage movies-"You're getting all this, right?"-and screams out for a tripod, but for the most part is a zippy young adult sci fi story with equal parts brains and heart.

Goofy, clever, and endearing enough to be worth your time.

It hardly entertains... and you will quickly forget it. Anyway, at least it doesn't offend. [Full Review in Spanish]

Has a catchy, high-concept premise... But it is the horribly botched found footage aspects that doom Project Almanac.

Project Almanac feels like a cautionary tale of what happens when creators make literally every wrong decision.

Ultimately forgettable despite some novel ideas, Project Almanac loses a point for also being a found-footage movie; a stupid gimmick that only adds the risk of causing a migraine.

Phil W. Bayles
One Room With A View
View All Critic Reviews (98)

Produced by Michael Bay, Project Almanac is a rather generic found footage, sci-fi thriller. While rummaging through some of his father's old papers David Raskin comes across a design for a time machine, and (with the help of his friends) attempts to build it. The plot is pretty ridiculous and none of performances are very good. Additionally, there's no real reason why these kids would be filming themselves; at least outside of the time travel experiments. Yet when the actual time travel plot kicks in, some interesting things are done with causality and paradoxes. Project Almanac delivers a few entertaining thrill, but overall it's a poorly made film.

After numerous attempts and failures, newcomer Dean Israelite directs a refreshing spin on this dying genre. This found-footage film follows David, a teenager who has been accepted to M.I.T for science. After finding an incomplete project his dad left behind, he and his friends set out to finish the design for a time machine, unlocking infinite possibilities. Overall, "Project Almanac" is a really fun film, but it's pacing issues really hurt it. For the first half you are just waiting around for it all to begin, and once it does, it picks up and slows down constantly. You have seen this style of film done to death by now and if you can not find any enjoyment out of it, there is nothing new to see here. In the end, it is not an original film, but they make the best of it and I enjoyed myself. "Project Almanac" is safe fun!

Quinn: It's yesterday! Project Almanac feels like the result of producer Michael Bay taking the film Primer and throwing it into a room where the MTV Films scientists could poke, prod, analyze, disassemble, and reassemble it into a time travel film that could appeal to teenagers of today. That is not inherently a bad thing, but it also does not mean this film will have much lasting appeal for the future, compared to other time travel films or other films that also utilize the 'found footage' format to better effect. So with that in mind, despite some clever ideas and an energetic sense of momentum, Project Almanac is only so much fun, if you don't think too hard about it, but innocent enough to work for what it is, with the target audience likely willing to have enough to enjoy. read the whole review at thecodeiszeek.com