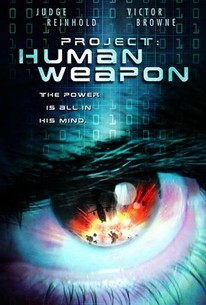 A covert US/Soviet military experiment designed to create the ultimate telepathic and telekinetic soldier backfires when the sole successful test subject goes AWOL in an explosive tale of action-packed conspiracy starring Judge Reinhold. It was a risky venture from the onset, and when only one of the five test members emerged from the top-secret military experiment suitable for battle they could never have imagined the trouble he would cause after learning the real purpose of his training. With time running out before the powerful soldier called Mindstorm decides to turn on his handlers in an attempt to get revenge for their deception, it's up to former Black-Ops officer Evan Mink (Reinhold) to find and contain the unstable warrior and ensure that the government's dirty little secret doesn't hit the headlines.

'Project: Human Weapon" looks like it was made for televison. No, wait, that's kind of an insult to TV movies. This is like a pilot for a TV movie that failed.

There are no featured audience reviews yet. Click the link below to see what others say about Project: Human Weapon!