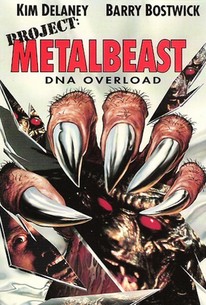 In this sci-fi/horror hybrid, Anne De Carlo (Kim Delaney), a research scientist working for the military, is working on a formula that will make human skin impervious to bullets. While experimenting with the formula, De Carlo decides to try it on a man who has been put into suspended animation using cryogenic techniques. What De Carlo doesn't know, however, is that before he was frozen, the man was contaminated with the blood of a werewolf, and now she's created a bloodthirsty monster that can't be stopped with a silver bullet. Project: Metalbeast (which was also released simply as Metalbeast) also stars Barry Bostwick, John Marzilli, and Kane Hodder as the "Metalbeast."

Hunter Person
as Paramedic No. 1

Gary Lamb
as Paramedic No. 2

Glenn Robinson
as Johnson
View All

There are no critic reviews yet for Project: Metalbeast. Keep checking Rotten Tomatoes for updates!

There are no featured audience reviews yet. Click the link below to see what others say about Project: Metalbeast!