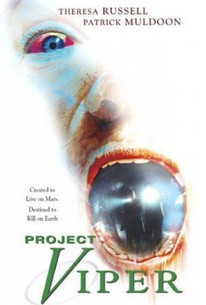 A NASA spacecraft taking an experimental bioengineered life form, named V.I.P.E.R., to live on Mars doesn't even make it out of Earth's orbit before the thing escapes its pod and slays the crew. Luckily, NASA can cover up the disaster, because that creature is stuck in outer space. The bad news is, it wasn't the only V.I.P.E.R. made, and the other one has escaped its earthbound confines and is now haunting rural California, where it uses its tentacles to grab and devour anything that breathes. NASA sends its best off-the-books agent, Mike Conners (Patrick Muldoon), to find the creature and evaporate it. Conners is hindered by two things: he's been partnered with icy Dr. Burnham (Theresa Russell), who invented the critter, and someone behind the scenes at NASA has reason to see that Conners fails in his effort to slay the beast.

The budget obviously didn't allow for much on the effects side of things, and it's shows, in turn making Project Viper a mostly mundane event

There are no featured audience reviews yet. Click the link below to see what others say about Project Viper!