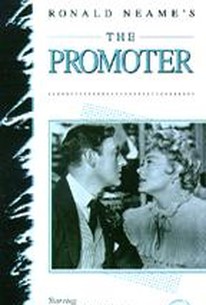 The Promoter was based on the Arnold Bennett novel The Card, which served as its British release title. Impoverished young clerk Alec Guinness works his way up the financial ladder until he has become a successful and highly respected loan officer. Actually, Guinness is not as above-board as the world perceives him. Beginning with cheating on a high school exam, he has wheeled and dealed his way to the top, and ethics be damned. Balancing Guinness' cold-blooded business savvy is his comparative ineptitude with women, particularly the bewitching Glynis Johns. Only Alec Guinness could succeed at making his "Sammy Glick" character appealing from first scene to last. The Promoter was scripted by Eric Ambler, who managed to unearth moments of sly cynicism that original author Bennett had barely touched upon. ~ Hal Erickson, Rovi

Valerie Hobson
as Countess of Chell

Lynn Evans
as The Boatman

Matthew Guinness
as Denry as a Boy

Paul Hopkins
as Denry as a Baby

The Promoter is a sprightly spoof that gives Alec Guinness a role ideally suited to his deadpan comedy talents.

Neame and his players inject this with plenty of wit, distracting one from the Horatio Alger cliches.

The principal character in Arnold Bennett's novel The Card... provides a made-to-measure part for Alec Guinness in a capital performance.

The Promoter, while vastly amusing in spots, is not a first-rate Guinness show.

The Promoter is a good example of an efficient but not very stimulating comedy that gets seen and liked because the critics admire it.

It's solid stuff, but too many involved seem to be marking time.

Somewhat typical Horatio Alger story made interesting by a cast of outstanding performers.

Brisk, brassy and keenly observed, Neame's film is a thoroughly enjoyable social satire that will appeal to the blagger in everyone.

There are no featured reviews for Promoter at this time.