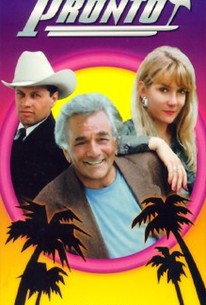 Based on a best-selling novel by Elmore Leonard, this crime drama centers upon a Florida bookie's attempts to leave behind his sordid life and to build a clean new life for himself and his ex-stripper girlfriend. He has a nice little nest egg to help him do it and plans to live on the Italian Riviera. Trouble is, the bookie got the money by quietly embezzling from a prominent and potentially dangerous mob boss. The boss's number one assistant discovers the bookie's crime and so begins planning to have him killed. Matters only get worse after the U.S. government tries to convince the bookie to provide important evidence against his former employer. To protect him, the G-men assign a U.S. Marshal. This only further complicates matters.

Luis Guzman
as Torres
View All

There are no critic reviews yet for Pronto. Keep checking Rotten Tomatoes for updates!

One of the best Elmore Leonard adaptations out there, and the best in recent memory, as it didn't suffer from the fiddling of screenwriter Scott Frank. Too bad it's so hard to find.