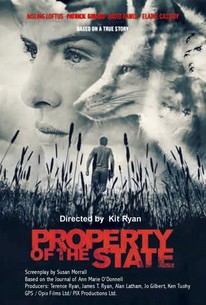 A hard-hitting drama based on the true story of a young woman who must deal with the devastating effects of having a murderer for a brother. Anne Marie O'Donnell pieces together the harrowing events that lead to the murders by her brother Brendan in the forest of East Clare, Ireland, of a young mother, her son and the curate, Father Joe Walsh. Piece by piece, as her story unfolds Anne Marie reveals the neglect by the state, the brutal physical beatings that her brother suffered as a child at home and the sexual abuse and rape inflicted by his nightmarish parish Priest whilst in his care. Ultimately, mistakes and lost opportunities all lead to tragic consequences.

Critic Reviews for Property of the State

Property of the State is a relentlessly grim chronicle of systemic failure and institutional abuse.

It doesn't do anything narratively or artistically creative to set itself apart.

Property of The State does a very good job of telling a terrible human story against a backdrop of institutional incompetence and fear. It is a very Irish tragedy.

Property Of The State clunks along like a TV movie and ultimately fails to justify its exhumation of this awful event.

Director Kit Ryan plods through Brendan's story of abuse, but the narrative flails.

There are no featured reviews for Property of the State at this time.

Property of the State Quotes