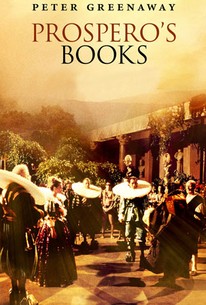 Critics Consensus: There is no middle ground for viewers of Peter Greenaway's work, but for his fans, Prospero's Books is reliably daring.

Critics Consensus: There is no middle ground for viewers of Peter Greenaway's work, but for his fans, Prospero's Books is reliably daring.

Critic Consensus: There is no middle ground for viewers of Peter Greenaway's work, but for his fans, Prospero's Books is reliably daring.

Puzzle-master Peter Greenaway exposes another aspect of his peculiar obsessions to the filmgoing public. Prospero's Books uses Shakespeare as a foundation and then skips along to define its own lush territory. The books of the title are briefly referenced in +The Tempest -- Prospero is a magician who gets to keep only a small fragment of his enormous library when he is exiled with his daughter to an enchanted island. In the film, Prospero is played by Sir John Gielgud. Indeed, everybody is voiced by Gielgud as he describes the events that unfold. But mostly, he describes the books, and as he does, the screen fills with florid calligraphies, astonishing diagrams, extravagant paintings, and lots and lots of naked people.

The product of a feverish, overflowing imagination, this almost impossibly dense take on The Tempest displays both the director's audacious brilliance and lewd extravagance at full tilt.

Gone is any sense of drama or character; the cluttered spectacle yields no overriding design but simply disconnected MTV-like conceits or mini-ideas every three seconds.

To some degree, the relentless proliferation of ideas smothers the dramatic highs and lows, but this is a minor quibble compared to the sheer ambition and audacity of the overall conception.

Greenaway is not a frivolous film maker. He doesn't shoot a lot of material with the expectation of stumbling upon a found object within. His films are planned from the first frame to the last.

Greenaway bombards you with images, with no regard for the average attention span. Is he a genius or a fake? Debating that question is almost as stimulating as watching a Greenaway film.

When all is said and done, it's a Tempest in a teapot.

Does it work? That depends on whether you find Greenaway's elaborate visual conceits and rarified narrative structures daring and liberating, or boringly self-indulgent.

Lubricious biblophilia rubbing up against a warehouse of naked extras, this Shakespearean adaptation is, in many ways, the epitome of cinematic pretension.

It cries out to not only be heard but be seen for what it wishes to convey about the act of creativity.

Gielgud's voice has the ability to put you right to sleep with its bass and monotone timbre. The good news is that when you wake up, you won't have missed a thing.

There's nothing quite like it in all of cinema -- and that's either a very good thing, or a very perplexing one, depending on how you feel about Greenaway's work.

... quite pretentious and much ado about nothing.

Visually phenomenal de facto stage adaptation of 'The Tempest' with 82-year-old John Gielgud reciting nearly every line of dialogue! Moving sets, film overlays, animation, and all sorts of old-school camera tricks really arrest the eyes, which is a must to get through the lengthy and often laborious monologues. Also contains the largest number of naked people in a single movie that I or anyone else has ever seen, including anything from Caligula to Gonzo Gangbangs Vols. 1-6. The kind of film you'll want to watch once but likely only once.

An adaptation of Shakespeare's "The Tempest" with John Gielgud as Prospero, featuring decadent sets, nude spirits, sumptuous video overlays, optical tricks, and animated books. Paintings from the Old Masters come to life and morph into each other as Gielgud reads almost every line of the play; even if you hate it, it's impossible not to be impressed by the massive scale and detail of this encyclopedic movie. Sadly, there is no decent way to legitimately see this in Region 1; the exsiting DVD release is a criminally muddled, pan-and-scan transfer of the VHS release. This is the kind of movie the Blu-ray format was invented for.

Sorry I hate Greenaway. He is only director who puts me in a coma through repetition of sounds and images. I have never understood it and I doubt I ever will.

It is a great Movie, what is wrong with you guys?