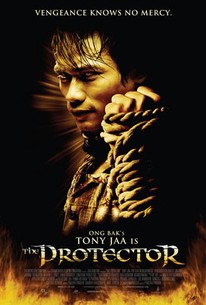 Critics Consensus: Despite some impressive fight scenes, this trimmed-down version of the Thai action pic is an off-putting mix of scant plot, choppy editing, and confusing subtitles and dubbing.

Critics Consensus: Despite some impressive fight scenes, this trimmed-down version of the Thai action pic is an off-putting mix of scant plot, choppy editing, and confusing subtitles and dubbing.

Critic Consensus: Despite some impressive fight scenes, this trimmed-down version of the Thai action pic is an off-putting mix of scant plot, choppy editing, and confusing subtitles and dubbing.

Kham's life is turned upside down when an international mafia syndicate, based in Australia, captures his two beloved elephants and smuggles them thousands of kilometers away to Sydney. The two elephants are far more than mere animals to Kham and his father; they are part of his family and were being prepared to be presented as a token of devotion to his Majesty the King of Thailand. The only way Kham can possibly save the animals is by venturing into a foreign land for the first time. Taking on a mafia group to rescue two elephants from a foreign country presents a huge challenge, even for a martial arts master like Kham. Despite the help of Sergeant Mark, a Thai police Sergeant based in Australia, and Pla, a Thai girl forced into modern day slavery, the going gets tough. They must take on the ruthless gang of Madame Rose, whose henchmen include Johnny, a Vietnamese thief and martial arts expert, and the hulking TK. Kham has no choice but to risk his own life for the animals he loves.

Nathan B. Jones
as TK

8 Essential Martial Arts Movies to Prime You for Into the Badlands
Total Recall: The 20 Greatest Fights Scenes Ever
Box Office Guru Preview: Crowe vs. Bale in Box Office Shootout

It's tremendously refreshing to see a film that relies solely on the choreography of its athletic star to make the action work.

Pretty tough to sit through.

Exactly like an elephant, mostly slow and lumbering -- but with great menacing charges of excitement.

Jaa's ingratiatingly ridiculous Protector delivers a steady stream of cheap B-movie thrills, plus two positive messages for young people: Be nice to animals, and when in doubt, always aim for the tendons.

By the end you're so invigorated that narrative issues seem like an afterthought.

The premise is hopelessly silly and pointlessly convoluted, as well as stuffed with laughable dialogue, but it purposefully tries not to interfere with the sensational stunts.

Truly, the best martial arts film about elephants yet made.

In the realm of fresh martial arts movie stars, no one holds a candle to Tony Jaa.

You have to wonder why they even bothered with the subtitles. It's not like they make much difference.

a no-brainer, but also an extravaganza of inventive, visually stunning brutality (by the trunkload).

If you like you martial arts action tough, gritty and fast, Tony Jaa is your artist, as he proved on his debut with Ong Bak (2003). This is Muay Thai, a form of aggressive martial arts that makes the others look tame.

(aka Tom-Yum-Goong, The Warrior King, Thai Dragon, Revenge of the Warrior) A much hyped fight film from Muay Thai expert Tony Jaa with many many excellent stunts and chase sequences. The only problem is we have now seen all this before from various other martial arts experts. The film itself is fine but its not really too original in any aspect, a simple revenge plot as usual and Jaa showing his skills yet again. Its very spectacular but I personally didn't get too engrossed. The most impressive thing about the whole film is the MMA fight sequences (the basic reason for this movies existence) mainly the fight between Jaa and Capoeira fighter Lateef Crowder. This one fight sequence is the most impressive fight I've seen in years, its fantastic, Crowder is amazing and almost too good to be true with his moves. Add to this the following fight between Wushu expert John Foo and then a one off battle against wrestling strong man Nathan Jones which is impressive merely to see the size differences, think Bruce Lee v Kareem Abdul Jabbar. To be honest the film is worth seeing for those three fights, apart from that its business as usual with this action film.

The story and script are weak, and the acting is pretty wooden, but then again, those are not the reasons to see this. This film about a man tasked with protecting elephants who goes off to save a pair of them from an international crime syndicate feels less like a movie and more like an excuse to show off some crazy stunts and awesome fight scenes. That's okay with me. Against my better judgment I'm giving this film a mild recommendation because...damn..what this film gets right, it gets it right in spades. Going for the Jackie Chan style of doing everything practically and with no CGI, the action in this movie is balls to the wall incredible. The highlight, for me is a masterfully executed long take in which Jaa's character fights his way up several flights of stairs in order to confront one of the villains in a restaurant. The choreography and sets are one thing, but the fact that it was done as an unbroken long take just really takes the cake as far as impressiveness is concerned. Aside from the action, this is just a blah and predictable movie. It's enjoyable, but could have been great if everything was as strong as the fights and stunts.

there is no doubt that tony jaa is a legit action star. his martial arts work is stellar and the stunts were exciting, however, he has nearly no dialogue in the film, and other than knowing that he protects elephants we know nothing about him. some of the action sequences were fun, but some were way too over the top, like johnny the crime boss calling hoods from all over the city through the loudest horn ever built in a torn down little warehouse. There was also a fight scene at the end that was the scene that never ends, where jaa must have fought half of the population of australia. the film was fun, but also carries the distinction of being the movie that features the only major crime syndicate in the world to possess thugs in the thousands without a single one of them owning a gun. jaa with a more creative storyline - lets hope.

Kham: "Where the hell is my elephant?" On the eve of presenting a pair of prized elephants to the King of Thailand, a young martial arts expert and his father are shocked to discover that the beloved creatures were stolen by an international mafia syndicate, and now the determined fighter must travel to Australia to get his animals back in this adventure from the team behind the international action hit Ong Bak. To Kham (Tony Jaa) and his father, the elephants that they were about to present to the King of Thailand were not simply pets, but members of the family as well. When Kham learns that the criminals who stole his elephants have taken them back to their home base in Australia, the fearsome fighter vows to brave the strange new land and bring his animals back safely no matter what the cost. Upon arriving in Australia, Kham enlists the aid of Thai Police Sergeant Mark (Petchthai Wongkamlao) and pretty slave Pla (Bongkuch Kongmaili) in taking on down notorious crime boss Madame Rose (Jing Xing) and locating the animals he loves before it's too late. Review The heir apparent to the Jackie Chan, Jet Li mantle has done it again. Breathless action sequences that have to be seen to be believed including an extended fight sequence with about twenty gang members and a restaurant fight that will leave you with a breathless feeling. Story such as it is revolves around Tony Jaa setting off after some elephant poachers and following them to Sydney, Australia to regain custody of said elephants to give to the King of wherever he actually resides. As with Ong Bak, the story is just an excuse to get Mr Jaa into as many stunt filled fight scenes as possible and once it gets started it never really lets up for even a moment allowing our hero to do many wild and crazy things in the pursuit of his elephant friends. If you're a fan of non stop action movies give this a whirl I guarantee you won't be disappointed.