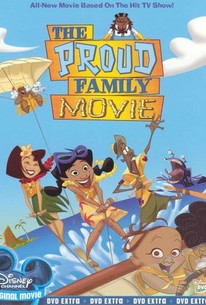 A frustrated teenage rebelling against her over-protective father experiences the adventure of a lifetime in this feature-length animated family-oriented adventure originally aired on The Disney Channel. On the eve of her 16th birthday, all Penny Proud wants is to celebrate with her friends and dance in the upcoming hip-hop halftime show starring red-hot-rapper 15 Cents. Despite Penny's plans, however, her well-meaning father Oscar has other plans -- he's just booked the family for a tropical vacation on Legume Island and Penny couldn't be more perturbed about the sudden change of plans. What the Proud family doesn't realize, though, is that the entire vacation is an intricately planned setup by the nefarious Dr. Carver who has lured the family to the remote island in hopes of stealing Oscar's Instant Everlasting Multiplying Formula in order to take over the world. Now as the rest of the family falls right into Dr. Carver's diabolical trap, it's up to Penny to save her family -- and the whole world.

LisaRaye McCoy
as Choreographer
View All

meh the only redeemable factor is the villain