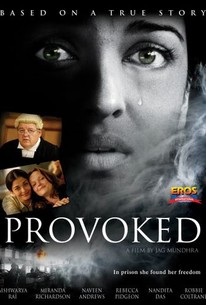 Critics Consensus: Provoked's story is worth telling, but the hammy dialogue and heavy-handed direction doesn't give it the refined treatment it deserves.

Critics Consensus: Provoked's story is worth telling, but the hammy dialogue and heavy-handed direction doesn't give it the refined treatment it deserves.

Critic Consensus: Provoked's story is worth telling, but the hammy dialogue and heavy-handed direction doesn't give it the refined treatment it deserves.

Inspired by the true story of Kiranjit Ahluwalia, Jag Mundhra's Provoked tells the tale of a battered wife pushed to the ultimate act of defiance. As a nineteen year old girl living in a small Punjab village with her overbearing sisters and their husbands, Kiranjit Ahluwalia (Aishwarya Rai) aspired to get a college education and see the world. Despite her ambitious plans, however, Kiranjit put her entire future on hold the moment she met handsome family friend Deepak (Naveen Andrews). Later, after a whirlwind romance, Kiranjit and Deepak married and prepared to move into Deepak's home in a quaint suburb of London. Kiranjit's storybook romance would quickly give way to a terrifying reality however when, over the course of the following decade, the loving bride suffered a relentless torrent of emotional and physical abuse of her tyrannical husband. Eventually pushed to her breaking point and desperately fearing for the safety of her children, Kiranjit killed Deepak and was subsequently sentenced to life in prison. Though Kiranjit was at first reluctant to share the details of her harrowing experience, she eventually became convinced that the only way to break the cycle of violence was to share her story with the world. Miranda Richardson, Rebecca Pidgeon, and Robbie Coltrane co-star in a docudrama that encourages viewers to take a closer look at the proliferation of domestic violence.

Deborah Moore
as Jackie
View All

Despite being based on a true story, the film's presentation is overly dramatic and the characters seem too stereotypical.

What should have turned out as a terrific movie about the crime of spousal abuse has instead received the equivalent of a ham-handed molestation by director Mundhra.

The real-life heroes in this story deserve better than a formulaic, poorly shot melodrama.

The script is melodramatic, and Rai's lead performance is thin stuff.

[Director] Mundhra can't control the expansiveness of the melodrama or focus on the terseness of realism. Every character in Provoked, from victims to tyrants, Indian to English, loud to quiet, ends up as a grossly exaggerated comic creation.

A melodrama dressed up just enough to hold interest, in the retelling of an undeniably important story.

By offsetting Women in Cages-style throw-downs with Malcolm X-like uplift, it is simultaneously strange and familiar, inspiring and annoying.

In the end, Provoked is not provocative enough.

Account of a legal campaign launched by women to expose the brutality of domestic violence and male chauvinism.

A well-picked but badly told story, director Jagmohan Mundhra caricatures practically everything on screen - taking away from the realism that could've made Provoked a great movie, and Aishwarya Rai, indifferent from her character, doesn't help the proceedings.

Average real-life based movie, nothing that makes it "A Must Watch".

This is a fantastic movie, and one I most likely won't forget soon. This movie is deeply touching and moving. Miranda Richardson gives a stellar performance, and so does Aishwarya Rai and Naveen Andrews.

The story educates one of the atrocities that can happen to a woman.