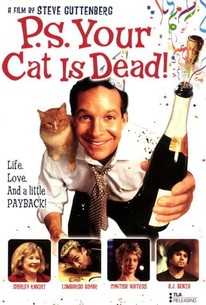 Jimmy Zoole (Steve Guttenberg, also making his directing debut) has been having bad, bad day. Not only has his one-man version of Hamlet (performed with hand puppets) just tanked, his girlfriend has left him, his cat is gravely ill, and his unfinished novel has been stolen. Plus, it's New Year's Eve. So when Jimmy finds Eddie (Lombardo Boyar), a gay burglar, lurking in his apartment, he isn't exactly thrilled. On the verge of a major breakdown, he ties up Eddie and uses him as an outlet for his multitude of frustrations. Eddie, it turns out, has a few of his own, including an ex-wife who won't let him see his child. What follows is a New Year's celebration replete with party hats, rope, and some very, very deep emotional issues. Based on James Kirkwood's cult novel (Kirkwood also won a Pulitzer as the author of A Chorus Line), P.S. Your Cat is Dead was screened at the 2002 Philadelaphia Gay and Lesbian International Film Festival.

Ann Guttenberg
as Lady at Party

Lisa Popeil
as 911 Operator
View All

Critic Reviews for P.S. Your Cat Is Dead

[The Boys in the Band] is much wittier and funnier than the comparatively frantic and frenzied shouting matches devised by Messrs. Guttenberg, Korn and Kirkwood.

Remains too much a filmed play.

It's another world now, which is why Kirkwood's play, adapted to the screen by actor Steve Guttenberg, feels so moldy and out of date.

It is, inevitably, an actorly exercise -- not off-puttingly so, perhaps, but at no time do we have a sense that we've transcended the stage. Or, for that matter, 1970.

The performances are solid, but as a screenwriter, Guttenberg can't make the situation seem like more than a theatrical construct in a contemporary setting.

The story doesn't have anywhere interesting to go once Kate, appropriately humiliated, slinks away.

In 1975, the idea of a straight man tying up a gay burglar was exotic, darkly humorous and sexually charged. In director/star Steve Guttenberg's new film version, it comes off as no big deal.

Guttenberg is a capable director; his framing is crisp, his pacing brisk, his eye alert to telling detail.

Guttenberg ... obviously meant this as a major stretch, and does his best acting work since his breakthrough in Diner.

A two-character roundelay whose modicum of enjoyment depends largely on your own personal appetite for social commentary transparently dressed up as assertively quirky entertainment.

Guttenberg's Jimmy is such a natural extension of the actor himself, which adds a dimension the original playwright never could have imagined.

Audience Reviews for P.S. Your Cat Is Dead

There are no featured audience reviews yet. Click the link below to see what others say about P.S. Your Cat Is Dead!

P.S. Your Cat Is Dead Quotes