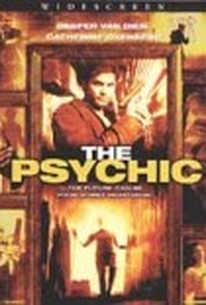 Killed in the line of duty, police detective Jack Barnes (Casper Van Dien) is brought back to life. But it's not the same life he left, and he's forced to confront psychic visions of violence. While being hunted by government agents and the men who killed his partner, Barnes sets out on a race to prevent his nightmarish predictions from coming true. The Psychic also stars Catherine Van Oxenberg, Paul Anthony and Cam Cronin.

Critic Reviews for Premonition (The Psychic)

There are no critic reviews yet for Premonition (The Psychic). Keep checking Rotten Tomatoes for updates!

Audience Reviews for Premonition (The Psychic)

This film is what it is nothing more then a film made for TV. Some how after 9-11 Hollywood still thinks the Russians are our enemy. A police officer while in prusidue of a suspect rolls his car over, taken to the hospital with critical injuries he dies but is brought back to life, when he recovers he starts seeing the future. Big question during this movie is how many times can people shoot a gun and not hit anything. And this police officer shots anytime anywhere with no thought to where his bullets end up while shooting in public and the film never shows us. A late night early morning film that no one would watch and only a date line call service would sponsor. 1 star

This was a pretty weak movie. The car chase was just pictures of drivers making scary turns with the car wheel. The FBI are dimwits - no CSI here. The nuclear materials are treated like they are nothing to be frightened of, and when the nuclear materials explode, nothing happens. But as long as you don't mind the lack of realism, I guess it is an exciting movie.