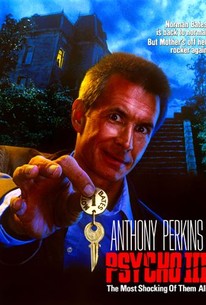 Critics Consensus: While it can't come close to the original's elemental horror, Psycho III makes a persuasive -- and blackly funny -- case for itself as a sequel.

Critics Consensus: While it can't come close to the original's elemental horror, Psycho III makes a persuasive -- and blackly funny -- case for itself as a sequel.

Critic Consensus: While it can't come close to the original's elemental horror, Psycho III makes a persuasive -- and blackly funny -- case for itself as a sequel.

More of a parody than a genuine suspensor, Psycho 3 marks the directorial debut of Anthony Perkins, who reprises his role as the unbalanced Norman Bates. This time poor Norman succumbs to the beckoning of his mummified mum and returns to the past. There is plenty of gore and blood in this outing but "Psycho" fans will enjoy it.

Virginia Gregg
as Mother
View All

It fails any sequel's acid test: It feeds off the original without deepening it.

It is still fun to watch Perkins slowly reveal Norman's overwhelming compulsions and he remains the central reason for seeing the film.

The question: Does the world need "Psycho III?" The surprising answer: Yes.

In real life, Perkins has been forced to live with this captivating killer for a long time. And in taking up the story once again, he has made some very astute decisions.

Red herrings, flashbacks and hallucinations, violence and the various obsessions of its characters give this complicated and occasionally out-of control film a curious power and appeal.

Perkins, who bows here as a stylish director, proves neither in-gracious nor self-indulgent.

Psycho III succeeds not so much through its script as its attitude.

Still playing Norman, Perkins is unable to find a new direction for the character in his own sequel.

Psycho III is funny almost from start to finish, and yet remains frightening and suspenseful. As a first-time director, Perkins has done a magnificent job.

Norman's back on the big screen, nuttier than ever. Alas, his newest adventures are merely monuments to sloppy scriptwriting and film-company greed.

The screenplay is lacking, but Perkins' experimental directorial style earns the film a solid recommendation.

The problem with this outing, which marked Perkins' directorial debut, is that it largely plays like a run-of-the-mill slasher flick.

Picking up where Psycho II left off, the Bates Motel is again the site of some nasty doings as the rehabilitated Norman, who has installed a new ice machine, attempts to put his life back together. Old habits die hard, however, in this sequel marking the directorial debut of Anthony Perkins. We open with a strange prologue in which nun-to-be Maureen (Diana Scarwid) denounces God, inadvertently causes the death of another nun, and runs away. Wandering through the desert, she?s picked up by greasy drifter Duane Duke (Jeff Fahey), who does not seem to get that she is not picking up on his advances because a) she used to live in a convent, and b) he is a greasy drifter. Anyway, the two split ways, and we move on to the Bates Motel, where things have picked up right where the finale of Psycho II left off. (There is even a flashback in case you have forgotten how that one ended.) Our old pal Norman (Anthony Perkins ¿who else?) has posted a help wanted sign, and it is Duane who gets the job. Maureen shows up later, and Duane gives her the infamous cabin no. 1. But Norman cannot shake the feeling she is not Maureen, but Marion Crane. As a movie, it is so-so. The film plays like a smart mystery poorly mixed with a dumb 80s slasher flick; there is one rather graphic murder scene that feels added in just to cash in on the horror trend of the time. It does not seem a part of the Psycho series. The other deaths, however, are right in line with the minimum-blood, suspense-over-gore technique. The plot is a little nonexistent this time around. Norman seems to be falling for Maureen, and vice versa. Duane is a creep. A nosy reporter (Roberta Maxwell) has come to town to check up on Norman's rehabilitation. And mother?s been talking again. That is all there is, really. Gone is the intricate mystery of Psycho II (I will not bother to compare this to the original Psycho; it would not be fair). In its place is a rather interesting, softer character study - can a mass murderer and a mentally unbalanced former religious type find love? - blended with a less engaging chain of killings. The screenplay, by Charles Edward Pogue, lacks the kick of the previous entries, as it does not contain the glorious surprises of those films. Which brings me to those three key scenes. Two are just nifty bits that always catch my eye. In one, the famous shower scene is recreated nearly shot-for-shot... in a telephone booth. In the other, a body is hidden in the motel's ice machine; will the sheriff notice the ice he is sucking on has some blood on it. It is the third key scene that really gets to me. It is yet another take on the shower scene, this time with Mother entering Maureen's room just as she did those many years ago. But the script throws us a curve, resulting in a move that is smarter than anything else in the movie. I will not tell you what it is (you shall have to see for yourself), but it is a scene that gets me every time. Behind all this is Perkins, who, in addition to his reprisal of his most famous role, also marks his directorial debut. Perkins knows the material and seems to enjoy tinkering with the characters. His decision to have everyone play a little too over-the-top doesn?t quite work, as what is meant to come off as black humor often times comes off as merely Jeff Fahey not acting well. Still, Perkins? playful mood keeps the movie from sinking into an overly-serious zone, and some of the plot?s dumber moments are allowed to be tossed aside with tongue in cheek. So just as Psycho II was a great movie on its own and a fair successor to Psycho, Psycho III is a decent movie on its own and a fair successor to Psycho II. Its not a great movie by any means, but any fan of the Hitchcock classic whose curiosity was snagged by ?Psycho II? should find something of interest to see here. It is not, as its ads once claimed, the most shocking of them all, but it does have enough clever bits to earn a recommendation.

This third entry is a slight step down from part two, but still manages to deliver enough thrills for what it is. Directed by lead actor Anthony Perkins, Psycho III is a satisfactory entry with nothing really new going for it. Despite this, there are all the signatures of what makes a Psycho film, minus the Alfred Hitchcock treatment. For what it is, it entertains, but mildly. Perkins seems to direct with uncertainty with the known fact that the original 1960 classic is so iconic not only in the horror genre, but in the cinematic medium. Despite this, Anthony Perkins directs a pretty decent flick that is fun, but lacks something to make it worth seeing again. The thing I liked about this film is that Perkins managed to convey the creepy atmosphere well enough by some well placed scenes and a good performance as Norman Bates. This flick will surely divide fans even more than the second sequel, but one thing is for sure, it's definitely not awful. As a directorial first for Anthony Perkins, he was able to convey a picture fun enough to make for a worthwhile Slasher. However, what bugs about the sequels is that though amusing to watch, it kind of ruins the suspense factor of the Hitchcock original by having a much higher body count and more blood. Even if it's a Psycho film, the films shouldn't be seen as just a Slasher outing because along with Peeping Tom, Psycho set the standard for the Slasher genre fifteen, twenty years later. These films were way ahead in their time and revolutionized horror cinema forever. Psycho III is entertaining, but can't be compared to the original due to the Slasher aspect of the film. Nonetheless, worth seeing.

Anthony Perkins jumps in the directors seat for this third installment, and he does a mighty fine job. There are still some rough parts around the edges, but for a first time this is great. It's obvious he is finding his own style by incorporating the skills and techniques of others. The cinematography has a very 80s, nostalgic feel, and is certainly taken from Blood Simple. Perkins also uses some tricks he seems to have picked up from Hitchcock. I love the toilet kill scene, as we see the roll of toilet paper roll down in a similar way to the shower curtain being pulled in the first film. The film picks up where number 2 left off, with Norman having reverted to his old ways after his real mother confronted him. This means there is a true lack of mysterious suspense surrounding the film. Having seen the second film, Bates is still a character to root for, as we know he has the capabilities to be good, but it's the insanity around him that causes him to slip. There are many parts that feel forced, and it smells of studio interference. The last shot, for example, completely undoes the ending and what it should have represented. A great addition for a rather surprisingly awesome trilogy.

A pretty good sequel to the sequel of Psycho, it continues the story, but I didn't like the ending. Of course, Perkins is great once again, but the rest of the cast could be better. It's interesting to see Perkins direct, though.