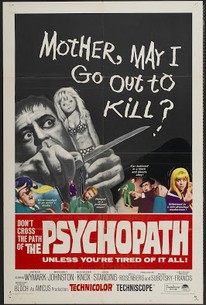 Though scripted by Psycho author Robert Bloch, this is neither a sequel nor a variant on the Alfred Hitchcock classic. Instead, we are presented with a more subdued British version of an Italian "giallo" thriller, as interpreted by acclaimed director Freddie Francis. The plot involves a pattern of grisly murders whose perpetrator leaves a small doll by the body of each victim. The plot thickens as police eventually link each of the victims to the lost fortune of a German tycoon, whose dirty business dealings were uncovered shortly after World War II; what seems at first to be the work of a single revenge-minded maniac hints at a wider-reaching and more devious plot. Bloch's script, though lean and filled with surprises, is a bit too overloaded with manipulative twists, red herrings, and futile attempts to outdo Psycho's manic intensity, but Francis still builds sufficient momentum to keep viewers on the edge of their seats. ~ Cavett Binion, Rovi

This Amicus production falls somewhat short, with an initially interesting mystery becoming more obvious and less gripping as it unfolds.

Sturdy enough.. for director Freddie Francis to dump plenty of style onto the proceedings, aided and abetted by cinematographer John Wilcox and composer Elisabeth Lutyens.

Despite its flaws 'Psychopath' was able to assimilate the tendencies that surged after the successful release of 'Psycho.'

An Amicus film from yet another screenplay written by the ubiquitous Robert Bloch, th