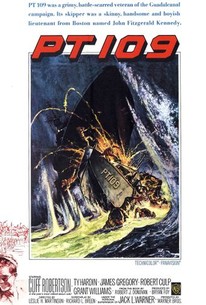 This World War II adventure chronicles the real-life courage of President John F. Kennedy when he was a Navy lieutenant and Commanding Officer of the illustrious PT 109, a Patrol Torpedo boat stationed in the Solomon Islands. While on patrol one night, a Japanese destroyer rams and slices the 109 in two, killing two crewmen. Having survived the collision, Kennedy searches for survivors, despite suffering from a back injury. Kennedy leads the survivors in swimming to a deserted island, while himself towing a badly-burned crewman. After a few days, the survivors encounter two natives and gives them a carved message on a coconut. The natives take the message to an Australian coastwatcher who arranges for a rescue. "PT 109" was the first commercial theatrical film about a sitting United States President released while he was still in office. It came out in June 1963, just five months before Kennedy was assassinated.

It probably works best for fans of the popular President.

Much of the film hits the familiar notes of the classic platoon film with a stiff reverence... It also delivers a personable portrait of an inspiring leader.

JFK as most remember him. Fine performance by Robertson.

This is less a historical document than it is a satisfying action story.

Way below average American Propandha movie with no story. To make things worse, the protagonist is none other the good ol' JFK. Expect an episodic obstacle course which is tackled by easy-going Cowboy GIs with million dollar smiles. There is nothing to see here, keep walking.