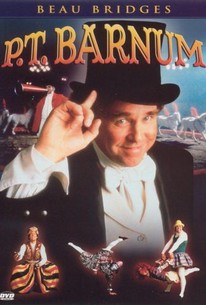 Previously portrayed on stage and screen by the likes of Wallace Beery, Burt Lancaster and Jim Dale, colorful 19th century American showman Phineas T. Barnum lives again in the person of Beau Bridges) in this two-part, made-for-cable biopic. The film covers Barnum's career from his early exploitation of Joyce Heth (Lorena Gale), an elderly black woman who claimed to have been the nursemaid of George Washington, through the establishment of his famous "dime museum" of oddities (including the celebrated wall sign "This Way to the Egress") and concluding with such triumphs of showmanship as Barnum's promotion of "Swedish Nightingale" Jenny Lind (Jayne Heitmeyer), midget performer Gen. Tom Thumb (Josh Ryan Evans) and Jumbo the Elephant--not to mention his formation, with James Anthony Bailey (R.H. Thomson), of "The Greatest Show on Earth": the Barnum and Bailey Circus. Inevitably, however, Barnum's unbridled lavishness takes a heavy toll, not only on his bank account but also his personal life. Filmed in an appropriately larger than life fashion, P.T. Barnum was broadcast over the A&E Network on September 12 and 13, 1999.

There are no critic reviews yet for P.T. Barnum. Keep checking Rotten Tomatoes for updates!

There are no featured reviews for P.T. Barnum at this time.