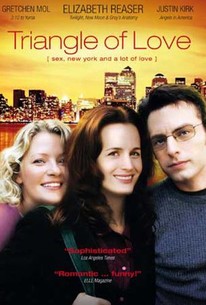 A woman who loves opera finds herself playing a romantic version of musical chairs in this independent comedy from writer and director Maria Maggenti. Allegra (Elizabeth Reaser) is a writer who has been involved with Samantha (Julianne Nicholson) for some time, but Allegra just isn't willing to make a commitment. Eventually, Samantha decides she's had enough, and she not only leaves Allegra, she jumps to the other side of the gender divide and starts dating a man. While Allegra is none too pleased with Samantha's actions, she unwittingly finds herself following suit when she meets Philip (Justin Kirk), a college professor, at a party. After a few cocktails, Allegra and Philip end up in bed, and while Allegra is content to leave it as a one-night stand, Philip has different ideas, and goes so far as to dump his girlfriend to pursue a relationship with Allegra, even though she's made it clear to him she's not at all serious about him. At the same time, Allegra strikes up a new romance with Grace (Gretchen Mol), but she doesn't know all that much about Grace's previous lovers -- who happen to include Philip. Puccini for Beginners was screened in competition at the 2006 Sundance Film Festival. ~ Mark Deming, Rovi

Will Bozarth
as Jimmy

Ashlie Atkinson
as Woman on Bench

Critic Reviews for Puccini for Beginners

Fresh Manhattan locations prove as photogenic as the leads, and the supporting actors -- especially Tina Benko as a glacial, impeccably dressed amazon -- don't miss a beat of Maggenti's snappy dialogue.

It's amiable enough but there's nothing on show to make it stand out from the average rom-com.

[Actress] Reaser is no slouch in the emotionally befuddled whirlwind department. In the end, it's all la dolce vita no matter how you look at it.

Reaser really doesn't stand a chance. She's plucky as heck, and you like her despite the script, but she can't save the movie.

There is pleasure and even insight to be had in Puccini but it all feels second-hand, and therefore, of questionable provenance.

Puccini for Beginners doesn't quite make it as romantic comedy. Most of the elements are in place, but the characters seem too narcissistic to fall in love and too broad-brush to be authentic.

Maggenti sticks to a format of mildly clever verbal banter when the audience desperately needs to be distracted from the bad novel Allegra is making of her love life.

But when all is said and done, Maggenti’s film transcends mere lesbian angst and offers some food for thought to lovers everywhere as they dance, sing or fornicate around the scary subject of commitment.

Puccini is the joyously refreshing romancer that it tries so hard to be. Its success has a lot to do with its casting directors who have peopled both the major and minor roles with aplomb. Even off-off-Broadway legend Helen Hanft has a cameo.

Thankfully, Puccini for Beginners isn't quite as exploitative as you might expect for a movie about a bisexual love triangle. But that's about all the credit this flat-footed, would-be screwball comedy gets.

Beware the indie screwball comedy that uses opera as a metaphor and lives in that dreamspace between Greenwich Village bookstores and the characters' belly buttons.

Maggenti has fun messing around with gender and sexuality stereotypes as well as relationship roles, and strives to hammer home the point that both men and women can devolve into comically clingy wrecks.

Audience Reviews for Puccini for Beginners

A lesbian on the rebound begins dating a man and a woman who have, unbeknownst to her, recently broken up. Most of this film clips by at a great pace, and some of Allegra's lines, like "Those who break up with me usually earn my life-long devotion," are quite funny. And the smart dialogue, especially by random strangers on the street a la Annie Hall, is a good reason to like this film. However, though I have no problem that the film eventually degrades into a basic tale about the need for commitment and emotional honesty, I don't think that Allegra emerges as a character who could learn that lesson or one deserving of the film's comic ending. Has she really learned enough, or doesn't life always tell us that we can only truly learn once everything is already gone? Overall, I didn't laugh at this comedy, but a little smile appeared once or twice.

Great movie!! Absolutely hilarious story plot. Intriguing. Here's a story of one woman who struggles to embrace relationship and commitment. Fearing those but wanting love and desire is one thing, but when she loses her girlfriend then she tries to find a semblance in replacing it in her life. Great cast- Gretchen Mol, Elizabeth Reaser, and Justin Kirk.