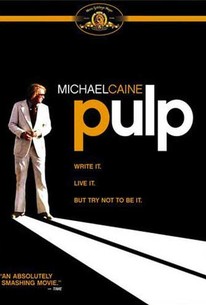 Writer Mickey King's (Michael Caine) pulp fiction has nothing on the memoirs he is ghostwriting for the abusive Hollywood gangster actor Preston Gilbert (a caffeine-and-Sterodent-powered Mickey Rooney). A page later, on-screen and offscreen worlds are blending, and the big sleep beckons for some. With a stylish Caine accompanied by an unforgettable George Martin score, this hilarious film blows the bloody doors off!

Pulp is an underrated comedic masterpiece.

The movie doesn't stir memories of classic noir as much as it traffics in British quirk.

...a seriously (and shockingly) interminable experience...

Feels like it has a place within Hollywood's history of misunderstood films.

Pulp is more of a cult classic, but its appeal and influence are nonetheless profound, and worth noting.

It functions less as a pulpy mystery or gangster tale than as a spoof of same, albeit a spoof that retains a noirish sense of fate and power.

Hodges avails himself of the private-eye genre's deaths, sex and homophobia, yet comedy loosens his nihilism

Had some fun in it.

Let's just say that "Pulp" isn't quite the Mike Hodges we're akin to; the Mike Hodges that made great films such as "Croupier" or "Get Carter". It's fairly sub-par for a director of his magnitude, and is lacking in many of the major areas that are required for a film to be considered "good". The plot is confusing and is never really made clear, and we spend half the time trying to figuring out the importance of the any of the characters. We meander from scene to scene, never really knowing what's happening. Half of the scenes are really quite unnecessary. Eventually, the story picks up with twenty minutes left to go, but by then we don't care. I won't necessarily say that "Pulp" is a "bad" film though. It certainly tries hard to be what it's not, and while you can certainly spot the influences here, "Pulp" never really pulls anything off. What we're left with is a forgettable neo-noir that could make for an enjoyable watch on any given night. It's not perfect, but it's a forgivable attempt.

I caught this on TV, and I didn't understand it at all, then I saw it again from the beginning, and I still couldn't quite understand what was all going on. This movie is confusing and stupid. I wouldn't recommend this movie.

Ordinary crime caper with the conceit of trying to bring pulp novel conventions to screen with only middling results. Lizabeth Scott has a small secondary role here, her last screen appearance.