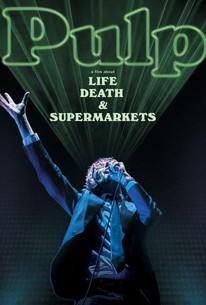 Critics Consensus: Witty, warm, and unconventional, Pulp makes up in overall entertainment what it lacks in depth.

Critics Consensus: Witty, warm, and unconventional, Pulp makes up in overall entertainment what it lacks in depth.

Critic Consensus: Witty, warm, and unconventional, Pulp makes up in overall entertainment what it lacks in depth.

Florian Habricht's witty, innovative documentary follows the legendary titular band (perhaps the smartest and most charismatic in all of BritPop) as they prepare to say farewell after 25 years of performances. Though culminating with the farewell concert the band played to thousands of adoring fans in their hometown of Sheffield, England, PULP is by no means a traditional concert film or rock doc. As much a testament to the band as it is to the city and inhabitants of Sheffield, PULP weaves exclusive concert footage with man-on-the-street interviews and dreamy staged sequences to paint a picture much larger, funnier, more moving and more life-affirming than any music film of recent memory. (c) Oscilloscope

News & Interviews for Pulp: a Film About Life, Death & Supermarkets

View All Pulp: a Film About Life, Death & Supermarkets News

Critic Reviews for Pulp: a Film About Life, Death & Supermarkets

Whatever the reason, this truly is a film about life, death, and supermarkets, which means it's a far better film about Pulp than any mere record of their final concert would have been.

The abbreviated history may mystify people who don't already know the basics. But the film does offer a vivid portrait of Cocker - wit, unlikely casanova and quite possibly hypochondriac - and an intriguing if glancing one of Doyle.

Habicht never dives too deeply or casts his net too widely, but as a filmic love letter to Sheffield, the resulting doc is full of small delights for serious Pulp fans.

A bright, eccentric testament to the mutual regard that Pulp's members and ordinary Sheffield residents feel about one another.

Habicht's film never goes beyond idol worship since his film only succeeds at reproducing Cocker's myopic vision of his band.

It's one of the better concert movies you'll ever see, but also much more than that, as Habicht paints a picture of a city and its inhabitants, not all of whom care about the band at all.

While the democracy of it casts a sweet spell and speaks to Pulp's generosity and humility, one wonders if even in this era of selfie culture Pulp fans will want to see this much of themselves on screen

What makes this rock doc a little different is that there are interviews of other people in Sheffield who talk about Sheffield as a city and as a backdrop for Pulp's music. This movie will appeal to Pulp fans and those interested in Sheffield.

It's the miraculous in the mundane, and the celebration of a united kingdom of common people.

For better or worse, it's the Pulp movie you'd expect, which is to say one that's really into 'This is Hardcore.'

A farewell concert film so entertainingly enthusiastic that it seems like an exciting greeting.

Audience Reviews for Pulp: a Film About Life, Death & Supermarkets

There are no featured audience reviews yet. Click the link below to see what others say about Pulp: a Film About Life, Death & Supermarkets!