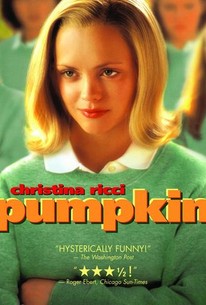 Critics Consensus: The messy Pumpkin wastes its premise by not making the satire sharp enough.

Critics Consensus: The messy Pumpkin wastes its premise by not making the satire sharp enough.

Critic Consensus: The messy Pumpkin wastes its premise by not making the satire sharp enough.

Adam Larson and Tony R. Abrams' directorial debut Pumpkin is an unconventional love story. College senior Carolyn McDuffy (Christina Ricci) agrees to coach handicapped athletes from a local town in order to help her sorority win an award. She and her sorority sister Jeanine (Dominique Swain) are put off by the activity. Carolyn's discomfort begins to dissipate after meeting Pumpkin Romanoff (Hank Harris), a young man in a wheelchair who has dreams of competing in the shot put. Slowly, Carolyn falls in love with Pumpkin, sending her into conflict with her boyfriend Kent (Sam Ball), her sisters, and Pumpkin's mother (Brenda Blethyn). This film was screened at the 2002 Sundance Film Festival.

This is the sort of Pumpkin that really deserves to be smashed.

By presenting an impossible romance in an impossible world, Pumpkin dares us to say why either is impossible -- which forces us to confront what's possible and what we might do to make it so.

Though Pumpkin extends its jaundiced joke too far, it's almost worth it for Ricci's final scene, which tells us everything we need to know about what will become of her.

If you believe any of this, I can make you a real deal on leftover Enron stock that will double in value a week from Friday.

[T]hose same extremes prevent us from taking its message seriously, and the Stepford Wives mentality doesn't work in a modern context.

I will acknowledge that I have yet to find any of my friends who've seen this film that truly embraced it on the level that I do.

Rambling and diffuse, this debut film vacillates between the Farrelly brotthers' gross-out comedy and a softer, kinder message film, an incoherent blend that proves frustrating and not particularly enjoyable either.

Like a grinning Jack O' Lantern, its apparent glee is derived from a lobotomy, having had all its vital essence scooped out and discarded.

In thinking about this movie, I first thought that is was such a stupid movie because none of it was logical. A car burns up in a grand explosion, and the driver comes out without a burn. A girl takes every pill she can find in the medicine cabinet, but comes out unscathed. But OK, the movie is a satire on almost everything.

Pumpkin 2002 is about women that who becomes a mentor to a disabled guy. Over time their friendship grows so munch like a hidden romantic relationship. Everyone around them total disapproval of them be that way together. Will Carolyn and Pumpkin be able to be togther by end or will people still disapproval of them by the end of the film. Pros Good acting and plot. True eye opening on this subject. Good ending It says it a comedy but I found it as a hard drama Tearjerker Cons Slow at times If u wants a good drama you should give this a try.

Pumpkin, a mix of drama, comedy and romance flaw with the not so good screenplay written by Adam Broder. Is really sad see that Pumpkin is not a fresh movie.

If you're understanding, it's not upsetting, but otherwise you may think of it as obscene. Personally, I loved it.