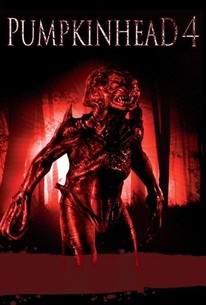 As the endless cycle of violence between the Hatfields and McCoys rages on, a youthful tragedy conjures the dreaded demon of vengeance to rise up and claim the lives of those who caused the death of a young innocent. Ever since the McCoys ran over Abner Hatfield with their motorcar and reneged and their promise to give the Hatfields the vehicle as a gesture of goodwill, the two backwoods families have been locked in an ongoing battle. But while the adults in each family are consumed by hatred, all young Jodie Hatfield and Ricky McCoy want is to love one another. Knowing that their families will disapprove of their union, the two young lovebirds furtively rendezvous in the woods as Ricky's little sister, Sarah, stands lookout. One night, as the two declare their love by the light of the moon, two of the Hatfield brothers spy Sarah in the woods and quickly give chase. When Sarah makes a fatal misstep and dies, Ricky visits the old woman in the woods and summons the one hell-spawn that can settle the score. But vengeance is a dangerous game, and before long both families are running for their lives.

Alexandru Geoana
as Town Boy No. 1

Adrian Pavlovschi
as Hatfield Boy No. 1

Vasilescu Valentin
as McCoy Boy No. 2

Roxana Andronescu
as Bride
View All

It should be appalling, but it's laughable.

If you're a diehard fan of this particular series, Blood Feud is certainly worthy of a weekend rental, but feel free to skip through most of the chatty parts

The "Well at least Pumpkinhead looked good!" excuse has officially run out of steam as we hit the fourth entry into the vengeance demon's horror franchise, Blood Feud. After some bullshit about how the Hatfields and McCoys actually hate each other because one family didn't give a car to the other(???) the titular Pumpkinhead is summoned because of course he is, to act as secondary antagonist in redneck Romeo and Juliet and- you know what, I'm done? It's the worst of the bunch and that's saying something considering it's coming off of two back-to-back failures in the series before it.

When you are in Mood to watch something grusel this Movie will only dissapoint you. At some point It even didnt make sense. I mean the character of Lance Henriksen a "Lost Soul" f.e.g His Background? I wouldnt really recommend it.

This gets a one for being made; beyond that, it has no redemptive qualities. I can't even be bothered droning on about the substandard awfulness of this. The largest problem is the sound - of which I don't think ANY was recorded on set. The whole movie seems dubbed and then smashed with public domain effects sounds. If the sound wasn't all done in studio, that makes this even worse as no one bothered syncing the sound to match the actor's lip movements. The effects are a bunch of cheap half-shot bullshit that any ten year old could do better, and the only decent bit of acting comes from the lead heroine.

Not as interesting as the previous entry, Ashes To Ashes but much gorier than I expected and it thankfully had a lot less crappy CG.