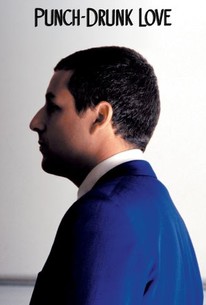 A dark comedy centering around Barry Egan, the socially impaired owner of a small business-distributing novelty toilet plungers-in the San Fernando Valley. Dominated by seven sisters, and constantly negotiating his own manhood, he is unlikely to find romance unless romance finds him. In an attempt to resolve his loneliness, while having a vulnerable moment, Barry contacts a phone sex operator who, in turn threatens him with blackmail. Connected to a larger business network, the operator sends some thugs on a mission from Utah to California, to follow, scare, and extort Barry. Barry becomes desperate, until a new door opens in his life. Therefore, when one of his sisters fixes him up with a lovely young English woman, Lena--who has rather quirky qualities herself--his emotions go haywire, fluctuating between lust, self-doubt, and uncontrollable rage. Nonetheless, Barry will embark upon whatever adventure it takes, just to have a shot at true romance.

David Schrempf
as Customer No. 1

Seann Conway
as Customer No. 2

Michael Immel
as Man on Plane

Alan Parry
as Member of After Eden Band

John E. Beck
as Member of After Eden Band

Eddie Wayne Howell
as Member of After Eden Band

Taylor J. Thomas
as Member of After Eden Band

Ku'Ulei
as Member of Ladies K Band
View All

It's a romantic comedy on the verge of a nervous breakdown.

The film looks good and has its funny moments, but too often one senses Anderson straining to impress...

A love-letter to the golden age of film, Anderson's opus is the equivalent of a jubilant Technicolor MGM romantic musical, except without the requisite singing and dancing and crossed with a stark cynicism that is Sandler's hallmark.

Nothing makes much sense, and the Watson character would have run a mile from Sandler, who performs like Jerry Lewis at his least endearing.

A movie of undeniable power and strangeness.

This may be P.T.A. and P.S.H.'s least successful pairing, but it's still great fun.

I recognize that I'm likely the minority voice when it comes to the opinions about what has been called his most accessible film and a romantic comedy unlike any other...

Starting out to be original, without any genuinely original conceptions ... well, there is nothing new about that.

This is a romance in which the lovers exchange such endearments as 'Your face is so adorable, I'd like to scoop out your eyes and eat them'. It won't be to everyone's taste.

[T]here's very little to hold onto in this lackluster, uninspiring film with the disappointing inertness of a deflated balloon.

Adam Sandler shows, much to our utmost surprise, that he can act when he wants and that he was the perfect choice for Anderson's take on a romantic comedy, a sweet, darkly humorous and amazingly well-directed film that is miles above most romcoms that Hollywood produces.

Sublime and surreal, this is quite a film from Paul Thomas Anderson. It is a smaller film from him, but one that is still as impressive as his others. The plot follows a shy sad sack prone to occasionally violent outbursts who begins dating a woman as equally shy and awkward as him. He's got seven sisters who hate and mock him, and he's got four goons after him looking for money after he gets extorted following a phone call he made to a phone sex line. The film is weird, as it is a surreal romantic dramedy, but like Brazil, despite that there are dark undertones (more subtle here than in Brazil) there is a quirky, uplifting feeling and charm as well...which I really enjoyed. Whimsical is the perfect way to describe this film. The acting is superb-leave it at that. No, I'm not kidding. This is Sandler's best. This film above all, is just wonderful to look at, and another reason for why it's so charming and great. It is a bit rough around the edges, and kinda bizarre, but it's really hard not to like, which is sad since it's still pretty underrated, but I really hope that changes.

A visually interesting and unconventional love story about a very awkward character coming into his own. I've tried, but I just don't think P.T. Anderson is my kind of film-maker - I recognize why the work he's doing is good, but I don't enjoy it all that much. Of course, all Anderson acolytes tell me that you have to watch his movies a few times before you really see how much he's doing, and how well. I'm open to revising my opinion someday... in the meantime, Sandler surprises here, and there is some wacky intrigue, but overall it comes of like the Coen brothers with an MFA. Not terrible, just not my cup of tea.

It takes place in The Big Lebowski universe of logic. And I adore it.