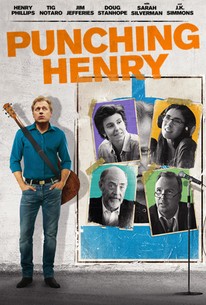 In this hyper-intelligent comedy, a journeyman comedian (Henry Phillips) is lured to L.A. by a TV producer (J.K. Simmons, Whiplash) who wants to make him a reality star. As reality sets in, he must decide whether his legacy will be to tell jokes for a living or become the butt of them. With an all-star cast including Sarah Silverman, Tig Notaro, Jim Jefferies, Doug Stanhope, and more, PUNCHING HENRY is a hilarious and heartwarming glimpse behind the curtain at the weird world of comedy.

Sympathy is a dollar that can only be stretched so far, and it gives out halfway through the movie.

The comedy in the film is biting and acerbic and sharply drawn from real life.

Mr. Phillips's self-deprecating humor is amusing but not funny enough to give him the edge he needs to rise up and conquer.

The knowing satire "Punching Henry" may not amount to a lot in the end, but getting there is lots of fun.

It's the kind of observational humor that instills a knowing chuckle and nod of the head, as opposed to an all-out chortle.

Punching Henry just sits there on the screen, supplying us with a few familiar faces of people most of us like and a few more characters who grate our nerves and don't give us any real sense of who they are.

Glum but smart comedy has some mature material.

There's an endearing weariness to Phillips' persona. He's about as close to a punching bag as a person can get for much of the film.

Stephen Mayne
Under the Radar

The result is endearing but also an incisive look at redemption and the fringes of fame.

Punching Henry features a fantastic supporting cast of comedians... and Phillips' low-key yet undeniable charisma keeps it from landing squarely in the Sad Bastard genre it otherwise circles, as does the fact that it's genuinely funny.

Still hapless, still deadpan, still cute...But if you saw "Punching the Clown" there's no compelling reason to see its sequel.

There are no featured audience reviews yet. Click the link below to see what others say about Punching Henry!