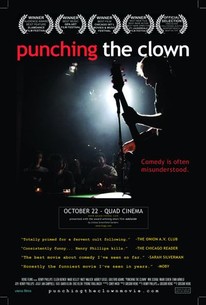 A modern-day troubadour learns the whimsical rules of the record industry after moving out to Los Angeles and becoming the subject of a vicious rumor. Henry Phillips travels through the heartland singing his satirical folk songs to anyone willing to give him the time of day. In the wake of a booking mishap involving a Christian fundraiser, however, Henry decides that it's high time he moves to a place where people can appreciate his twisted sense of humor. A few days later, Henry is crashing his brother's couch in L.A. But while his brother can't get an acting gig to save his life, Henry finds success almost overnight. A few solid shows later, and Henry gets a record deal, some radio airplay, and a positive write-up in a local paper. Not only that, but the pretty barista Henry's been admiring from afar finally seems to notice that he actually exists. Unfortunately, L.A. can be a fickle town, and when Henry becomes the unwitting subject of a nasty rumor, the success he's worked so hard to achieve suddenly begins to slip from his grasp.

Henry Phillips
as Himself

Derek Waters
as Dave the Intern

News & Interviews for Punching the Clown

View All Punching the Clown News

Critic Reviews for Punching the Clown

The comic folksinger Henry Phillips stars in this wry, poignant, smartly satirical comedy as himself, and puts himself into uneasy situations in which he doesn't always come out as the hero.

Punching the Clown can be too cute, but it's a quietly sad portrait of just barely getting by.

[If it] isn't entirely successful, it's partly because the music -- late-night satire swathed in gentle folkie chords -- and Mr. Phillips's modest but knowing manner don't quite match up with the "Star Is Born" clichés of the plot.

Punching the Clown is welcome proof that there remains at least one industry in which the US can compete with New Zealand: the parody folk-song business.

A quiet jewel of smart, unexpected laughs...as old vaudevillians would say, "It's funny because it's true."

The result is a shaggy rise-and-fall story that is deceptively well-wrought, playing at times like an extremely hip, deep-access concert film.

The film is an amiable, self-mocking satire about L.A.'s vacuous showbiz types.

In the spirit of "Curb Your Enthusiasm" and "Flight of the Conchords" but much funnier.

The fickleness and absurdity of life in L.A.'s entertainment industry has been skewered more effectively in a number of other movies.

Audience Reviews for Punching the Clown

There are no featured audience reviews yet. Click the link below to see what others say about Punching the Clown!