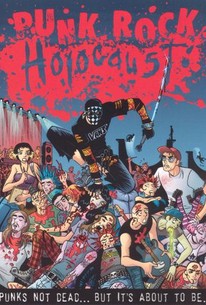 A series of brutal murders leaves the future of the Vans Warped Tour in question in this punk rock-fueled horror comedy from director Doug Sakmann. As the bands on the tour fall prey to the murderous menace one by one, Vans Warped Tour founder Kevin Lyman tries in vain to keep the tour rolling while simultaneously fending off the advances of a shady record executive (played by Troma's Lloyd Kaufman). With the body count steadily rising, reporter Heather Vantress does her best to unmask the killer as such featured musical acts as Andrew W.K., Kids of Widney High, Pennywise, and Tsunami Bomb entertain festival-goers while nervously peering over their shoulders in mortal fear for their lives.

There are no critic reviews yet for Punk Rock Holocaust. Keep checking Rotten Tomatoes for updates!

There are no featured reviews for Punk Rock Holocaust at this time.