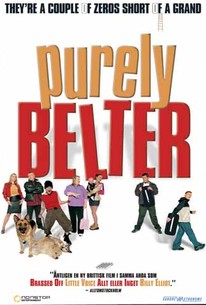 Two boys from troubled homes find that their love for British football gives them a focus in life -- and gets them into deep trouble in this realistic comedy drama. Sewell (Greg McLane) and Gerry (Chris Beattie) are two close friends growing up in an economically-depressed neighborhood in Newcastle-on-Tyne. Sewell has been living with his grandfather (Roy Hudd) since his parents abandoned him years ago, while Gerry, his mother (Charlie Hardwick), and his sister Clare (Tracy Whitwell) drift from flat to flat trying to avoid Gerry's dad (Tim Healy), an abusive thief and alcoholic. Sewell and Gerry aren't much on school, but they do have a dream -- they're loyal supporters of the Newcastle United football team, and they would love more than anything to have season tickets to see them play. However, the passes would cost 1,000 pounds, which is hardly within the boy's means; while they pledge to give up cigarettes to help save the money, they know that alone won't pay the tab. Gerry and Sewell try a number of schemes to make some extra money, from selling old things from around the house to shoplifting, but when they move on to the big leagues -- car theft and bank robbery -- things take an unexpected turn. Purely Belter was screened as part of the "Director's Fortnight" series at the 2000 Cannes Film Festival.

Alan Shearer
as Himself
View All

So bad in so many different ways that a review threatens to become a list.

An engaging, bittersweet ode to family, friends and football.

There are no featured audience reviews yet. Click the link below to see what others say about Purely Belter!