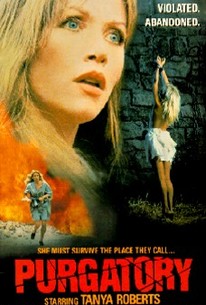 Carly Arnold (Tanya Roberts) is happily spreading goodness and light as a Peace Corps volunteer in Africa when she and her pal Melanie (Julie Pop) run afoul of the local, highly corrupt, justice system. Despite numerous bribes by her mother Ruth (Clare Marshall), the two girls receive an eleven-year sentence on phony charges of drug-peddling. They are sentenced to serve their time at a prison run by a dissolute warden (Hal Orlandini) who typically employs his better looking female prisoners as prostitutes. Melanie kills herself after being gang-raped by guards, and Carly, realizing she'll get no help from the U.S. Embassy, has no choice but to escape.

There are no critic reviews yet for Purgatory. Keep checking Rotten Tomatoes for updates!

There are no featured reviews for Purgatory at this time.