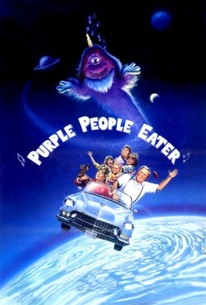 Linda Shayne wrote and directed this children's story based on the 1958 novelty song "Purple People Eater" by Sheb Wooley. Billy Johnson (Neal Patrick Harris) is joined by a friendly alien from outer space who wants to play in a rock & roll band. Peggy Lipton plays Billy's mom, with James Houghton as the father and Ned Beatty as Grandpa. The band lends a hand to some senior citizens in their fight to keep their beloved retirement complex. Add Little Richard and Chubby Checker to the fun as the heroes try and stop the greedy landlord Mr. Noodle (John Brumfield) from kicking out the elderly residents. Only one word in the film gives the movie a PG rating instead of G. Watch for Sheb Wolley in a cameo role as the trapeze instructor in this low-budget family feature.

Chubby Checker
as Himself

There are no critic reviews yet for Purple People Eater. Keep checking Rotten Tomatoes for updates!

Strictly for the kiddies though Shelley Winters and Ned Beatty manage to give it some dignity. Interesting to see Neil Patrick Harris at such a young age. Terrific soundtrack for fans of 50's pop.

I both loved and hated this movie. On one hand, we have a great message for both kids and adults to get involved with their families and communities to make a difference in each others lives for the good of all, and to have fun in life. But on the other hand, this was completely corny and cheesy, and the purple monster was stupid and annoying. I'd recommend having your kids watch it, but it'll be hard to watch it with them.